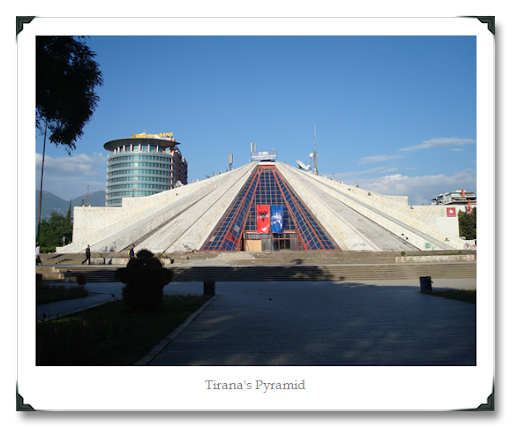 Originally built in 1988 as a mausoleum for the Albanian Dictator Enver Hoxha, it was to have been a museum of his life and times. However, three years after his entombment here his body was evicted, as Communism fell in Albania. For a short time it was used as an centre for contemporary arts, including film, music and art.

It is now used for two purposes: as a Centre of Culture - essentially a convention centre nowadays, and a huge slide for very brave children (and adults).

Now head on over to Lulu's Bay to see a few other pyramids that her friends have found, just to prove that Egypt isn't the only place with respectable pyramids!

Enver Hoxha was never entombed in there, and the structure is not a pyramid. Its architecture is designed to make it look like the double headed eagle from above.

slides for very brave children and adults.... this looks to me like a ton of fun... maybe it can be an attraction like the running of the bulls in spain..Come to Tirana and ride the double headed eagle

There are Bosnian pyramids too. http://en.wikipedia.org/wiki/Bosnian_pyramids .

That is a super space-age Pyramid! Excellent!

Also - can you please email me a normal jpeg copy of your pyramid - for some reason (probably live writer) I can't lift it off your site so it can be included in the collage.
Thanks
lulusbay@gmail.com

hehhe i grew up going up and sliding down that pyramid. The view of Tirana from the top is awesome, especially at sunset. But now there are so many tall buildings in Tirana and it's not that much fun anymore. Plus I'm not as flexible as I was 20 years ago. I'm a bit heavier as well, so I don't have any courage left to go up there. Maybe I can go up without looking down behind, but then the sliding down will be scary. I'll just dive like a metal ball and hopefully break only an arm and a leg when i come down. There is no other way but sliding when you;re at the top. There are no stairs that would go inside the building there. Anyone who is thinking about climbing should know this, as there is no alternative when you're at the top.
I've also heard that because of the ppl sliding there, the marble has thinned and it will cost a lot of $$$ to replace it!
I didn't know about the "eagle" structure, I always called it "piramida". Maybe I have to see a picture of the structure from above.