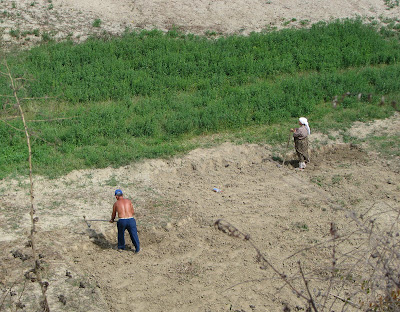 They step onto the golden plain and turn
Into men of iron. Midday heat
Seethes within them, and they hum
The ploughing of the fields.
The earth trembles
And roars beneath their feet,
As they sing its blessed lullaby.
It would not be strange one day
To hear ears of corn sprouting in their veins.
The warmth of the soil
Causes their blood to boil, and they are not afraid
Of open spaces, gold-grey,
Or the sepia of weak coffee.
The timeless contours of the ground
Do not stain their hands or faces.
As the cities' boom and clang make flimsy men of them,
They join the new dance, the sifting of earth, with ease
And begin their clamorous toil with bowed heads.
Their sweat, like a prankster, puts out their cigarettes
And cowers in the dark of loneliness.
Not yet hearing birds twitter overhead,
They fasten their fingers to the steel-nosed ploughs and turn
The soil. Fatigue glides off their fingernails
And wafts away.
The sun nods at them boldly
As it descends beneath the heavy breath of night.
[Këngëtarët e ninullave]

Gjekë MARINAJ
Born in the hamlet of Brrut near Rrapsh-Starja in the Malësia e Madhe district of northern Albania in 1965, Gjekë Marinaj studied journalism in Vlora and published his first news article at age sixteen. In his mid-twenties, he published an anti-communist poem called "The Horses" in Drita, a newspaper of the Albanian Writers Union. Warned that his arrest for writing the poem was imminent, Marinaj escaped the authorities by hiking through the mountains overnight and crossing the border from Albania into Yugoslavia. He carried with him only a few books and a blanket to protect him from the barbed wire at the border.
From Yugoslavia, Marinaj emigrated to the United States. Now an American citizen, he lives with his wife, Dusita, in Texas, where he is working on a Ph. D. in literary studies at the University of Texas at Dallas.
From: http://www.albanianliterature.com/authors3/AA3-46.html