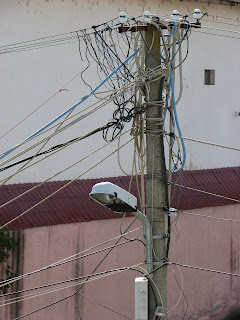 The Electrical Situation in Front of My House

Yes... this is me... the one who is always telling everyone else "You're learning important lessons from this...". Well this time it's ME who is learning the lessons around here. My first week back home was good... everything went smoothly (comparatively speaking) and I adjusted quickly to the time changes etc. And then BANG! Last Saturday we came home late at night and everyone else around us had normal electricity and our house was still on our mega generator. "That's odd", thought I. We manually turned off the gen. and still had no power. It's dark at midnight in our garage... We made a call to P's assistant and within half an hour someone was here trying to sort it all out, trying all sorts of tricks- even one involving our car battery and jumper cables (yes really). After some time, it was decided (not by us- but by the Albanians) that someone in the neighbourhood had cut our line, whether willfully or not who will ever know. They finally managed to get some power into 1/3 of the house and said that KESH (the power company) would come in the morning, which they did promptly at 9 am. Eventually they got it all sorted out and the power flowed fine. We're lucky (I KNOW that)- all of Albania has been having electrical cuts for months now- our area is cut from 2-5 in the afternoon and 7-9 in the evenings every single day- oh yeah- except for last Tuesday evening when the Dutch National Football (soccer) Team was here to play the Albanian team. Of course the power wasn't cut that night. 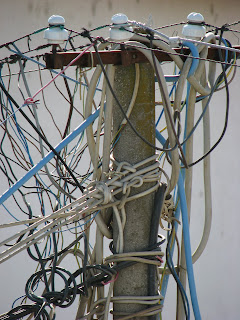 Oh What a Tangled Web We Weave!
Ho humm.... sometimes I think I must bore you.
Yesterday afternoon we came home and found we had no water. Yes that's right we have SEVEN water tanks and no water. Hummm.... we now know the routine... call someone who can help us... have water delivered by truck... fill the tanks (with a hugely LEAKY hose so that there is almost more water on the garage floor than there is in the tanks). Seems like it should work yes? But noooo.... come this morning when I go to brush my teeth... I turn the tap and a trickle of water falls into the sink... and stops. Hummmm (again). Well, it's 3 pm in the afternoon and after discussing various causes for the problem (yes the Albanians once again suggested a neighbour was stealing/borrowing/using our water), someone walked around to the back of the house and "discovered" the garden hose valve was in the 'on' position and the garden (which last week was so dry it had cracks like the Sahara Desert) now was a lovely manmade lake. Grrrrrr... it seems our new cleaning lady watered the garden yesterday and left the tap on. Hummm. Hummm. In the meantime can I tell you how lovely our Albanian neighbours really are? No they are not stealing anything from us (which I honestly never believed), but when they saw we were having problems with our tanks, they came over and offered us 1000 liters of their own water. For free. Yes, for nothing. They even refused a bottle of whiskey. Cheers!

Thank goodness for neighbours like that. Restores your faith in humanity.

What a mess that electrical pole is. Glad I don't have to work on that.

I feel the pain that you and most of the albanian people have to face every day without water and electricity. I wish this problem would be solved soon and the lifes of everyone else would improve a little bit.

As they say "good neighboors in hard days":))

Kim, are u sure that u paid your electricity bill? :D

you are blessed to have an open mind, patience, and great neigbhors. i think someone up there gave u the latter b/c you have the former!

We too had poles that looked like that outside our house in Istanbul in the 90's... and went through the water situation on occasion. Amazing how quick the neighbours are to blame someone other than us when things went astray... very kind people. LOL - Interesting that we lived there for almost 3 years without any drama - always had a good relationship with the other families in our building. After we left a Swiss couple moved in and got off to a bad start by complaining about EVERYTHING... suddenly there was no water - no electricty - they were burgled - their garden died (lucky they didn't have a pet) and finally the last straw was when the 'madam' was taking a nap and woke to find a man with a gun at the end of the bed - who then proceeded to take everything of any value... they left shortly afterwards.

Always good to live in harmony with the people who have the power to make your life a living hell.

Hi Kim,
Also took some holidays and was a bit absent here. Actually, I survived the Greek fires. Went to the Islands (Kos, Crete and Mykonos) where there were no fires.
I’m glad to be back and catch up your posts! The Fine Mess is a superb piece of bloggiong...
As I’m late, my posts at Blogtrotter are still in Bali 2005. Hope you enjoy it, anyhow!

Those electrical poles crack me up, Kim. How could anyone straighten them out! Your life there in Albania is a story book for sure. Nothing boring about it/you at all!

that electrical mess is unbelievable, looking a little dangerous too ! It sounds like a great adventure!

I work for an electric company in the states, and just had to show the picture of that electrical pole to my co-workers. It is amazing that there is any power at all in that mess.
It really makes me realize how spoiled we are over here. Several years ago, I remember a customer of our company who was extremely upset over experiencing frequent power outages. When inquiring as to how frequent they actually were, it ended up being about 2-3 a year. He made the statement that he had visited 3rd world countries who have better reliability than that. I couldn't help but laugh inside, and think of my in-laws on Tirana who had no power for a good part of the day. I wonder what countries he had visited?