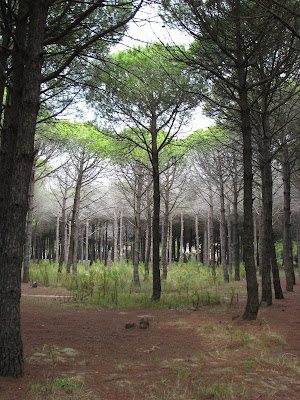 Pines at Durres Beach, Albania Sept '07
Departure
Although this land is not my own,
I will remember its inland sea
and the waters that are so cold

the sand as white
as old bones, the pine trees
strangely red where the sun comes down.

I cannot say if it is our love,
or the day, that is ending.
~Anna Akhmatova
Anna Akhmatova was born Anna Gorenko in Bolshoy Fontan, near Odessa, Ukraine, as the daughter of a naval engineer. She began writing poetry at the age of 11, and adopted a pseudonym to allay her father's fears that as a"decadent poetress" she would dishonour the family. The pseudonym was the Tatar name of Akhmatova's great-grandmother. When she was sixteen, her father abandoned his family. Akhmatova attended a girls' gymnasium in Tsarskoe Selo and the famous Smolnyi Institute in St. Petersburg. She continued her studies in Kiev in Fundukleevskaia gymnasium (1906) and in a law school (1907) before moving to St. Petersburg to study literature. Among her teachers were the poet, dramatist and essayist Innokenty Annensky (1856-1909), who influenced her deeply.
More info about Anna Akhmatova

You have just reminded me of my sister, Ruth, who is committing such poems to memory right now, Kim. I know you love to read. I learn from you.

Hi Kim,
great posts! Beautiful pictures, wonderful poems, and interesting text!
Thanks for your visit and comment on my blog. I just left Bali and I’m posting on Singapore at Blogtrotter.
Enjoy, and have a great weekend!

beautiful poetry, and the photo is wonderful, too! thanks for the little poetry lesson :)!

Years ago someone from England compared my early work to hers, I had not read her work at that point, and went to some trouble to get hold of it, this was B.I. (Before Internet) anyway, I felt honored by the comparison after that.

She was a great writer, and was very mistreated in her life.