It's obvious that lately I haven't been blogging much. I kinda lost the focus- or rather- I haven't been sure what exactly I should focus on here. Should it be what's happening here in Tirana ie. news, politics, traffic etc, or maybe it should be just my reaction to life in Albania. But I think that's been the problem- like I said a while ago, after a couple of years in one place it's not new anymore and it's harder to find interesting things around you. Of course things are constantly changing around here, but it's one step forward, two steps back. So let's see if I just focus on the things I do everyday if that doesn't help me to get my groove back here. 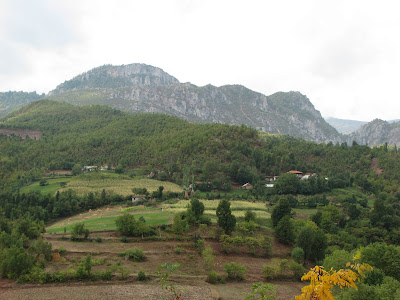 Albanian Landscape
Last weekend we were able to drive down to Ohrid Macedonia to meet up with friends who used to live here in Tirana. The weather was amazing- sunny, warm and clear. We left Tirana early in the morning and took the Elbasan road over the mountains. It's a shorter distance than going via Durres but it takes just as long (or maybe longer) time wise. But it's incredibly beautiful if you can stand the curvy mountain road. I have no problem with nausea or carsickness so when the weather is fine I always chose the mountain route.
Being Canadians we had to first arrange a visa for Macedonia in the week before our trip. It's not possible for Canadians to buy visas at the border, so we paid 22 euros each and got 10 day visas. Crossing the border was fast and easy. We immediately noticed the difference in the landscape. Albania has been deforested all around the border area- I imagine Hoxja did this some time in the past in order to make it easier to see any one who was trying to escape the country. On the Macedonian side the mountains are still covered in lush old forests. 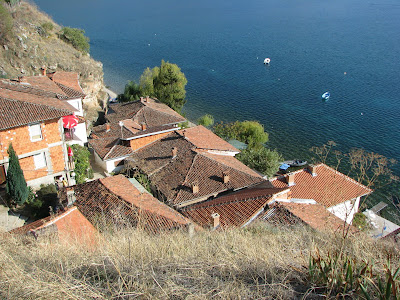 Ohrid is a charming, historical city located on the shore of Lake Ohrid, Europe's oldest lake! Only a few lakes in the entire world are older than Lake Ohrid. It's clean, cold, and deep, and is used for many types of recreation. Lots of boating, fishing, and when it's summer- swimming. Anyhow-- it's quite a lively resort town and was fully occupied by various conventions and trade fairs last weekend. 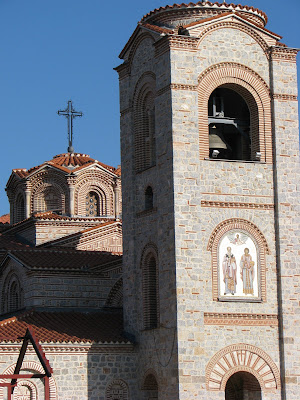 We only stayed for the day- enjoying a LONG walk through the town and all the way up to the top of the hill where the church of St. John the Baptist is located and then further uphill to the Church of St. Pantheleimon. We pushed ourselves to go just a bit further and made it up to the fortress where we stopped for a short rest. Along the way we stopped to watch some local people who were making Ajvar- the yummy relish made from roasted red peppers. Man does it smell delicious!!! 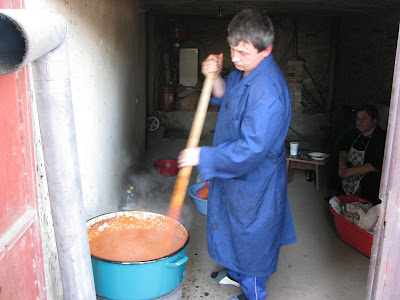 Late in the day we stopped in Struga for a coffee by the river, then drove up through the mountains to Skopje. The city was having something it calls "White Nights" and everything in the downtown core was open all night, including museums, so we went to the National Gallery at close to midnight and saw the interesting Japanese exhibition. 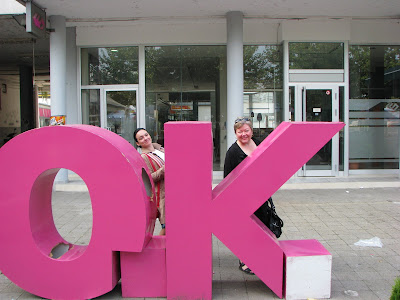 Vesna & I in Downtown Skopje

A lot of the city was destroyed during the earthquake some years ago, so much of the city is new or rebuilt, with a few areas still retaining the historical character. We had a guided tour of the Church of the Salvation, and then a fantastic lunch in a garden restaurant on the outskirts of the city. Then we headed back to Albania, arriving in Tirana quite late at night. As always, it was nice to be home again.

I think you have your groove back, Kim! Not that I ever thought you had lost it. You can never go wrong with showing us what's around you. But I know what you mean. By now, I'm thinking everyone is bored by any similar shots I might have in Amsterdam, simply because I see them every day. Through you I'm realizing that since WE don't see Albania every day, you probably could never bore us with your everyday shots. Just keep showing them!

Hi Kim
Great to see some photos of Ohrid and Skopje. Despite all my travels in the Balkans, my memory of Macedonia was just a motorway on the way from Thessaloniki to the Kosovo border and I never managed to get back to do any proper sightseeing.

I know what you mean, Kim, when you say you feel as if you've lost your groove. I am having the same problem of "where to go, what to do" with my blog, and I think it is at least in part because things have become so familiar after living in Yerevan for almost three years. I am also kind of struggling with that - and because of that not blogging a lot.

Hi Kim, Interesting trip. It seems that now white nights are multiplying all over Europe...
The Lake looks quite blue and beautiful, and St. Pantheleimon looks great (what a name; it remembers Pantaleón Pantoja, hero of the novel by Mario Vargas Llosa: "Pantaleón y las visitadoras"...)!
I'm still along the Rhine on Blogtrotter.
Sorry for the mess with the comments!