A Perfect Saturday in Albania 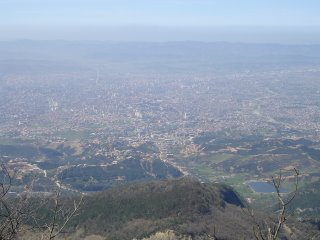 I've just uploaded a set of photos to flickr from our trip today up Mount Dajti, 25 kms. to the east of Tirana. At 1,610m, the mountain is really not that high by Albanian standards, but it does feel like it is 3 times that high because of the winding, and bumpy road you must take if you are going by car. There is now also a 'telerific' or cable car which opened last year which cuts the trip down to 15 minutes, but we thought it would be less interesting than the car. You can't actually go right to the top because it is full of military junk like radio masts and other stuff. There are a lot of beech trees, and pines, which I think would give off a lovely odour in the summer, but today the air was just nice and fresh. I was sorry to see so much deforestation and badly planned mining activity on land that is considered a National Park. Plus there is tons of haphazard building going on all the way up the mountain, with buildings that are quite unique but precariously set! We wondered if they'd still be standing 20 years from now. Our guidebook advises 'sensible footwear', so we had a good laugh because we found several women in fishnets and stilettos hiking at the summit.
Near the top is a good restaurant called Panorama where we stopped for lunch. Let me tell you- it was terrific considering where we were! P had his new Albanian favourite called 'fergese'- i think it's a mixture of sauted red peppers and tomatoes, mixed with a feta-like cheese, and some chopped meat. Each city in Albania makes fergese their own way. In Tirana it is made with chopped liver and kidneys, but in other places you might get it with lamb, or veal. THis is what it looks like (and it was bubbling hot)-- 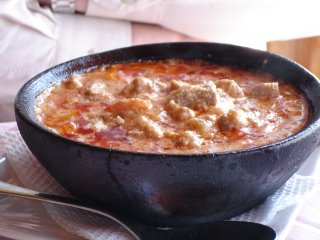 I ordered some delicious kascaval pane, lightly breaded and pan fried cheese, which was still firm and not too runny, just the way I love it. 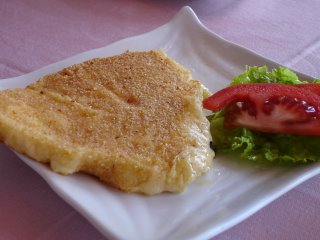 And then we shared a fabulous lasagna, which P declared was the best he's ever had besides mine! So that's a pretty good review I think. I especially liked the big dollop of sauce on top which I think might be the wonderful drained yogurt sauce called Salca Kosi. Here it is- 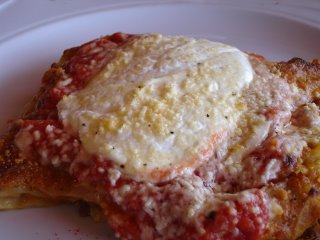 And yes.... my blog is becoming obsessed with food! (I have no idea why?!)

Regarding the fishnets and stilettos on top of the mountain...I see the same thing in Japan - it always makes me smile and wonder how they manage it :)

Regarding the fishnets, the great singer Ludacris said it best:

And the food obsession. Is it because you can't find anything else more interesting to do in Albania?

I found myself in such conundrum last year, when I visited.

Yum the food looks incredible. And the view! Yeah for albania... I never knew half of this existed until you showed me about it... Really it's so crazy what you think until you really are there or read/see pics from people who live in other areas of the world...

Hey Kim, Here are a few ideas for ya! knowing more about your traveling life would be oh so cool! (like those other cities you've lived in) Did you ever work? talk about that. And your children, do they live with you or are they back in CA?

I agree with ET that it sure is nice getting to know about a country/city and way of life I'd never know if it weren't for you. What P got to eat looks like chili. It all looks great!

btw, looking at these photos, makes me drool...that stuff in the black pot looks sooo good, you just melt the feta or what?? mmmm

Kim - we walked down the road tonight and saw snow on the mountain. At that moment, I thought of you because if we would have gone as high on the mountain today as you, we would have hit snow. Yes SNOW! It's cold here today, maybe 8C at most, but I'm thinking cooler than that... And snow just up the road... yuck!

Well in defense of the women in fishnets... I really think they were teachers accompanying their students!
Ginnie... fergese actually tastes nothing like chilli as there is no spice added at all, but it's still delicious.
Kim... the feta is crumbled into the dish and then baked for 15 minutes in an oven. It's yummy!

These pictures are making me toooo hungry!