Let me tell you about two Balkan things I absolutely love to eat. 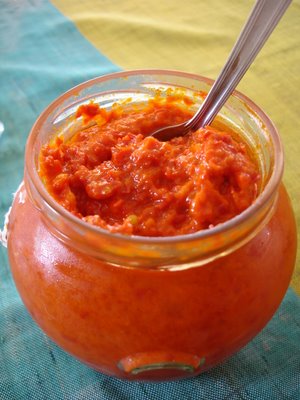 The first is called Ajvar and I think it is originally from Macedonia, but we can buy it here in Albania as well. It's basically used as a relish or a topping on sandwiches, much like bruschetta would be. But it's not made from tomatoes as I expected (it is red), but is a luscious combination of roasted red peppers and eggplant.It can be sweet or spicy depending on the peppers. I adore it on top of good wholemeal bread with a slice of cheese. It's divine. I remember as a young girl that at the end of summer the heady aroma of roasting peppers would waft throughout our neighbourhood in Toronto, however at the time I didn't know exactly what it was. Now I do. Without a doubt it was our Eastern European neighbours preparing the peppers for Ajvar. If I knew then what I know now I would have been begging at their door for a spoonful of this yummy treat. And the bonus is that it is low-fat and really low-cal! (Hurray!)

And the second thing I love is this- 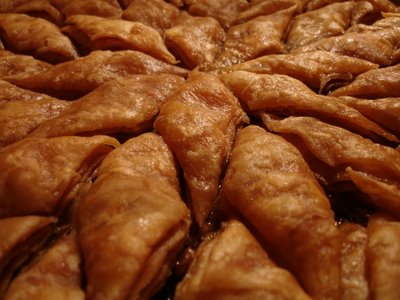 BAKLAVA! Ohhhhhh my goodness.... this is like eating the food of the gods... layers and layers of phyllo pastry filled with walnuts or pistachios and then covered in thick sugary syrup. The photo above is of the tray of Baklava that my Albanian friend just dropped off for my birthday (which was 2 months ago!). She made it herself and has volunteered to teach me how to do it. I can't wait. The only problem is that now we have a HUGE tray of this enticing sweet and I am sure it must be worth 50,000 calories! Come and help me eat it!!

Baklava is found in many cuisines, with essentially the same name:

You have nice friends, that looks absolutely delicious.
Bakllava is indeed pure indulgence, usually have it on birthdays/new year, and I can't wait for the next family birthday because that's making my mouth water :p

You certainly know how to hit the extremes, don't you! Baklava IS the food of the gods, not "like" it. OMG, yes! It just melts in your mouth. Too bad something that good has to be so "bad." But who cares right now, right?

The Ajvar is new to me but sounds just as heavenly. Do you know if they market it in Germany under another/same name?

I have never had baklava. How is it I've lived this long and never had it?

Ajvar looks yummy. It reminds me of something you get in Germany called Letscho which is a combination of tomato and peppers.

Lilly.. I am blessed with a few lovely Albanian friends!
Ginnie... I looked at the label and this brand is called Mr. Garden and is exported to the US.
Jen.. yeah... mmmm is right!
Dixie...you've never had Baklava?? You must be lovely and slim!

When we lived in Boston we used to buy the best baklava... it was our favorite weekend treat.

Oh Lord, I went into a diabetic coma just looking at the baklava! Dixie, you must try it!!!!!

The ajvar picture made my mouth water even more =P I love roasting red peppers and making relishes and sauces.

First of all I would just love to get over there and help you eat the baklava! Secondly, I have never heard of ajvar and certainly like the idea of roasted red peppers and eggplant that goes into it. Just reading your description of it over bread with cheese....YUM!!!!!

My teeth hurt just looking at all that sweet baklava! My Grandma used to make it, wonder why she doesn't know...

OK now I am starving. Time for breakfast!

Hi Cyn! You're up early! What's for breakfast? Ajvar with cheese on toast would be nice :)

A nice Albanian spread is "Salce Kosi" (literary translation Yougurt Sauce) which is basically yougurt drained of the liquid. Ask your friend(s) for a a little bit of it mixed with garlic and olive oil, I think you'll like it :)

anonymous... do you know we just returned 5 minutes ago from a trip up Mt. Dajti where I discovered Salce Kosi! It was soooo yummy, now I just have to find some in the market- Delicious!!

I had a feeling you'd like it. Thanks for all your posts, I like reading good reviews about my country :)

I've eaten baklava in a Sudanese restaurant - but I'm not sure if it actually is Sudanese.