Last night we experienced two very opposite kinds of fire.

First, at around 7pm I looked out the window and saw a huge billowing cloud of gray smoke, not far from our apartment. Quickly we ran out on the terrace to see what was happening and in just a matter of minutes the smoke had developed into quite a fire. People had gathered around the scene and in the distance we could hear the sirens as they approached. They arrived quicker than we thought they would and soon there were several hoses working on the fire. At one point I was teary eyed as I spied several elderly people on their balconies just above the fire. I wanted to shout to them to get out but I was too far away. In the end they were fine but they never abandoned their homes, which I think is strange. My instinct would be to get out. Perhaps because these buildings are made of concrete they are more impervious to spreading flames, but I'm not sure about that. In Canada we are drilled all the time about how to escape a fire. Families are encouraged to make plans and to practise getting out of a house. I am thankful that I've never personally experienced a fire, but I've always had a huge fear of them.

The second fire was a wonderful fireworks display for the inauguration of a really fabulous new office building in the city. We were to have attended the cermony but after our day up on the moountain we were too tired to go out. But luckily for us we have the most awesome view of the entire city from our terrace and so we were treated to the show. I LOVE fireworks and always stand in awe when they appear in the sky. Albanians seem to love them too, so from now until the fall I'm sure to witness many spectacular explosions. 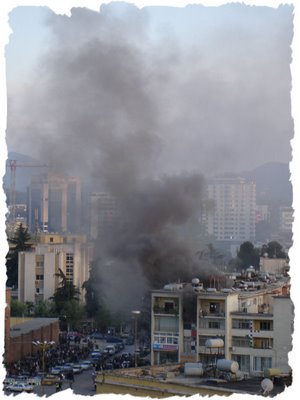 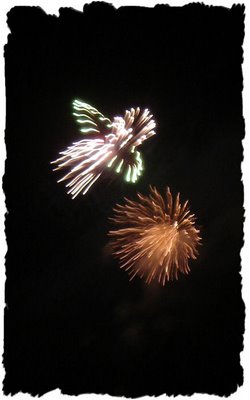 On Tuesday, I was reading your blog and my Albanian cleaning lady was walking past my PC and she saw the "Concrete Symbols" pics and she became excited and asked me "when did you go to Albania???" I told her that I was reading your blog and that you lived there. For months now, I was telling her how great the internet was but I thought it was falling on deaf ears. When she saw your blog and I explained to her it all worked she was totally impressed and asked me to order her a computer so her daughter could learn to use the internet.
She loved your pics and wanted to know more about what you were writing so I 'translated' a few of your posts and she said she loved your blog. I agreed with her and said that's why I read it all the time too. So on Tuesdays, you will have two people reading all your posts from now on. LOL

Wow... the power of the internet! That's really exciting and I hope I can share a bit of her country with her. Thanks for reading me SeaWitch!

Ever since I found your blog, I read it every day..it's on my 'regular' daily reading list!

Glad to hear no one was hurt in the fire. When I used to work on an ambulance, part of our job was to sit at house fires, just in case one of the fighters got hurt. I was ALWAYS amazed how fast our little wooden home burn. I guess you could say we are the little pigs who built their homes with sticks instead of bricks!


Just wanted to wish you a Happy Easter!
Cyn

Pops in to say Happy Easter

I know how you feel about fires except that my condo actually did burn to the ground a week before Christmas in 1994. It's worse thinking of it now, actually, than the experience. But thinking of those elderly people you saw made me feel so sad. Unbelievable!

What a great post, seguing as you did between the two extremes. And I love the quotes you found for each!

Thanks for your sweet comments ExT and Ginnie! I just love the photo of the fireworks because it looks like an angel to me.