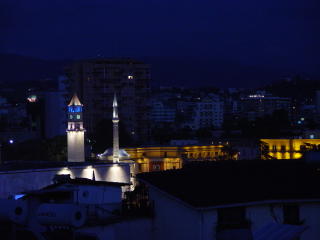 From our terrace we have a good view of the minaret of the Mosque of Et'hem Bey, and also the clock tower behind it. It is from the 18th century, which makes it one of the oldest buildings in Tirana- and to me the most beautiful. The minaret was repaired after being shattered in the battle for liberation. Hoxha apparently thought enough of it as a cultural monument to spare it during the atheism campaigns of the 60's. There are lovely frescoes on the both the outside walls and the interior, and you can apparently walk up to the top of the clock tower for a great view of the square. Because we live so close to the main mosque, we hear the calls to prayer throughout the day, and it's rather nice. I think the Muslims idea of reminding its faithful to pray and to remember God throughout the day is worthwhile, and something Christians might think about doing. On the other side of our apartment we hear the church bells but they're not nearly as pretty and not heard as often.