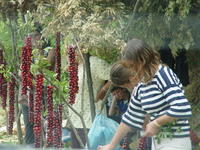 We were surprised to see long strings of red beads hanging by the side of the road, so our driver stopped and gave us a close up look- they weren't beads after all- but cherries! Perfectly ripe, organic, and the most delicious we have ever eaten. Someone spends hours tying small clusters of them to a long branch and then they hang them from bushes along the road. It's so pretty and enticing. 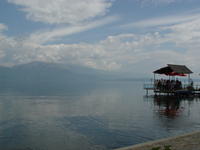 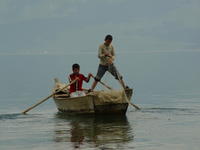 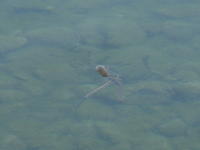 We stopped at a restaurant on Lake Ohrid, a large, deep lake on the Macedonian border. They've built a dock out over the water and it's quite a refreshing place to eat. We watched these boys manoever their boat while string out their fishing nets. Then we spotted something swimming around us and Peter told me to get a closer look. I was startled to see this large water snake happily looking up at me!

Ohrid is an interesting lake because it was formed by the shifting of tectonic plates, and it has several unique species of fish, which we had for lunch. Loch Ness is also a tectonic lake!The fish was delicious- a sort of red fleshed trout, called Koran. The lake is nearly 300 meters deep in places, and below 100 meters it is a constant 6 degreesC.

Ohrid is amazing. If you are going to live in Albania for 4 years, I would highly recommend that you visit a couple of touristic towns on the Macedonian side. One is called Struga, and the Other is called Ohrid (like the lake). They are respectively 3-3 1/2 hours away from Tirana and make the perfect gateway. (romantic and laid back)