Since I have time while I'm waiting for the repairmen (again), let's move on to the next day of our trip to Italy. 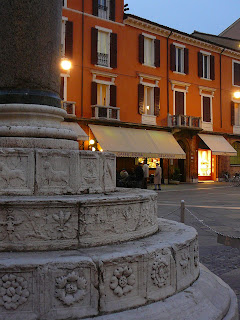 Cyndi and Danilo. I thought we'd probably need to take a break from the driving for a day and I was sort of hoping that we'd be able to spend a little extra time with Cyndi. I'm so glad I did. We were thrilled when Cyndi invited us to their home for lunch on Tuesday, and so after a drive about Faenza (where we couldn't find a place to park!), we took the long way round so we would arrive at noon. They live a really sweet town, at the end of a charming street, in a wonderful house.

We had a little tour of their place and were astounded by Danilo's collections! Do you know who Roxy Music is?? Well I kinda, sorta did, but who would have known that Danilo is obsessed with that band? And obsessed is putting it mildly. A whole wall is devoted to everything and anything he can find regarding Roxy Music and Bryan Ferry. And another huge wall of art books (drool- oh I wish I had time to sit and go through them!). Cyndi made a delicious lunch of prosciutto and cheese, followed by handmade capelletti with a cream sauce, which she told us is a very traditional dish of Emilgia-Romagna. We were stuffed once more. Did you know that Italians like wine??? I couldn't count the number of bottles on the table at lunch! Danilo had a wine for every part of the meal, including dessert and he made sure we tried each one. It was fabulous! He had to go back to work for the afternoon, so the three of us made plans to drive into Ravenna, the local city.

Ravenna was really a surprise! 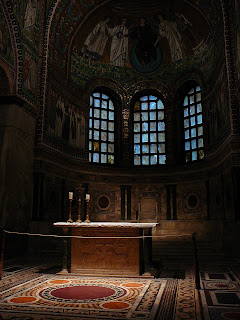 It's called the "Capital of Mosaic" and we found out why. It's a byzantine jewel and was at one time the capital of the Western Roman Empire. There are many buildings filled with these absolutely beautiful Christian mosaics. Everything is intact and breathtakingly brilliant. We stood in the basilica of St. Vitale with our mouths open in awe. We looked around and got goosebumps because we were the only people in this amazing place. This is a true Gothic architecture and quite a change from the typically medieval churches of northern Europe. Before the development of the construction of huge stained glass windows, frescoes and mosaics were used on the inside walls of Christian places of worship in order to tell stories from the Bible to the people. I can imagine just sitting in this holy place and finding so many reasons to be in awe of the Creator. One could spend days and days here discovering the mystical symbols of Christianity. We really didn't want to leave the basilica but the light of day was quickly coming to an end and there was more to see.

We stopped at several lovely monuments, including a tower which is leaning even more than Pisa's, and we stood inside Dante's tiny tomb just before a young

girl came to lock the door. Coffee at a little cafe, where we watched women as ancient as the city drink their espresso and puff (outside) on their cigarettes, and we walked back to the car for the drive home. We (somehow!) arrived back at Cyndi's place just in time to greet Danilo once more and we all said good-bye, feeling rather sad at having to leave our new friends.
It was a wonderful day and we highly recommend a visit to Ravenna!