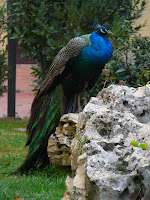 week in Italy. We had a beautiful drive from Assisi to Faenza and found our hotel quite easily. I had booked a lovely room at TRERE- a B&B/Agrotourism place just outside of the city. I expect it would normally be a very lively working farm but at the end of November it was perfectly quiet and I think we were the only guests, except for the family of showy peacocks! We arrived in the afternoon and had a bit of a drive around the area, then a short rest and waited with anticipation for Cyndi and Danilo to arrive.

Right from the start we were all great friends! Let me tell you- when you

have the opportunity to meet other bloggers- DO IT! I really think you won't be disappointed. Anyone we've met so far has been just as nice as they appear to be on their blogs. I don't think you can fool people about who you are for an extended period of time, and if you were trying to fool people, you probably would never agree to a meet-up. Cyndi is adorable, as some of you already know, and Danilo- well!! He's warm and funny and has a wonderful sense of 'joie de vivre'. Someone translate that into Italian for me please.

They whisked us away in Danilo's flash little sportscar and took

us to see the magical Italian town of Brisighella. We stopped at a distance from the town, unfolded ourselves from the car, and had a hug as we looked at the pretty lights on the enchanting tower. Next we had a walk about the town stopped for some terrific local wine and learned about the yummy local bread called piadina.

It was still before 8 pm but Danilo became a hero when he found an open restaurant. You sort of feel like you're breaking the law in Italy when you want to eat before 8, but lucky for us the kitchen was open at 7 and we once again ate delicious local food. We laughed til our tummies ached and stuffed ourselves with huge dishes of mascarpone for dessert. Somehow we managed to wedge ourselves back into the car and Danilo safely got us home. We made plans for the next day with Cyndi and crashed into the biggest, fluffiest bed ever.

Wow. You guys really had a wonderful time there! I'm looking forward to meeting a few bloggers in January.