Well I've had a day to recuperate from all the travelling and laundry doing, and I've finally found time to sit here and do a bit of catching up with all of you. Vienna was lovely but much, much hotter than normal, which is difficult in a city that is not built for the heat. Most places, including shops aren't fitted with air conditioning so browsing is better left for other visits. Most of my time was spent walking a short distance and then finding somewhere shady to sit for a cold drink. Luckily, in Vienna that relatively easy to do.

Here are a few of my new discoveries from this short trip to Vienna: 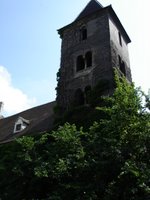 What a delightful little jewel of a church! while thousands of people visit the Stephansdom everyday, we were the only people in this wonderful little church. There is eveidence that it dates from the 11th century, making it the city's oldest church. St. Ruprecht was the patron saint of Vienna's salt merchants and this tiny church overlooks the merchants' landing dock on the Danube river. The interior of the church has undergone many restorations but the outside is still very quaint and feels quite medieval. We loved the Romanesque tower and the intriguing modern stain glass windows which fill the church with bright patches of primary colours. 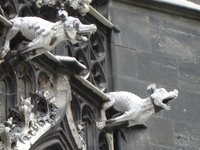 Gotta love these amazing gargoyles on the Stephansdom! I hadn't noticed them on previous visits but I spotted them while cooling off in the shade. They're impressive fellows aren't they? I read somewhere that the word 'gargoyle' is related to the sound that water makes as it streams through their mouths, but I'm not sure if it's true. Though it does make sense to me! 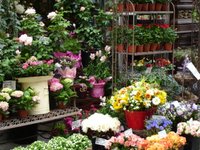 I adore beautiful flower shops and Vienna has it's fair share scattered around the city. It always makes me feel happy when I see how much creativity someone put into arranging everything so that we, the viewers, could enjoy the scene. So much better than a bunch of straggly slowers stuck in a bucket of slimy water.

Okay, Blogger has decided that I posted enough photos for today I guess. I've tried several times but can't get them up, so that's all folks. I'll try again later since I have more to share with you!

I reemember the flower shops in Amsterdam when we visited you ....... those amazing cabbages !

The flower shops in Europe are so wonderful, aren't they? I'm always amazed at the creativity. Looking forward to more pictures as Blogger allows. :-) We're expecting a very hot weekend as well.

I hope Blogger doesn't keep you on rations for too long :D

Oh Kim! It looks absolutely beautiful! I've got myself a hankering!

Just say "gargle" as if that's what you were doing.

We'll be going to Vienna at the end of the month. It's such a beautiful city. Great pictures!

all of your travel sounds like it has been great (despite the heat)! i've never been to vienna (or turkey!), but hope to go sometime soon! ahh, i wanna be on vacation!