Last night we went to such a fun event-- the very first Robert Burns Ball held in Tirana- probably the first ever held in Albania! Around the world Scots celebrate the birth of their national hero and poet, Robert Burns on January 25, his birthday. This year marks the 250th anniversary of his birth making it quite a special celebration. 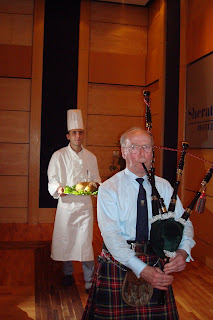 Now a Burns Ball is no ordinary ball. There are traditions that apparently must be followed to the letter, including the official "Address to the Haggis". Last night's address was given by the British Ambassador, Mr. Fraser Wilson. Then we learned just about everything you ever wanted to know about Robert Burns but were afraid to ask, followed by a lovely reading of Burns' poems by Mr. John Withers, the American Ambassador, and by Albana Paco, who read a poem translated into Albanian.
After a toast to the lassies, my dear friend Sam gave the response which was absolutely wonderful and oh so funny! Sam- you should have been a stand-up comedienne!
Dinner was yummy and began with the Haggis. Now I don't know about you but the terrific reputation of the Haggis proceeded it and I really never thought it would be something I would taste. BUT- it was delicious! Something I'd definitely try again.
A few of my friends and I rounded up a couple of the men in kilts and took a few photos. I was even given the honour of holding the bagpipes! All in all it was a fabulous 1st Burns Ball in Tirana! 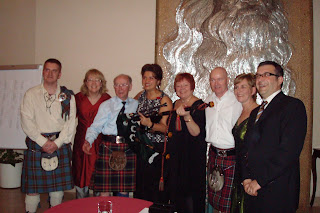 Wonderful evening you had. In the British community I live in, we also have a Burns Night every year. I love the haggis, but cannot really stand the bagpipes, I just put on a polite smile. Instead we normally have some Scottish dancing by children, even a version of the Sword Dance, most exciting! but the Address to the Haggis makes me laugh!

The Scots seem to take it all so seriously but it is such a silly event! I thoroughly enjoyed it!

That sounds like a lot of fun but the bleech on the hagis...ciao

Wow! It seems that Tirana is in a great «movida»... and you're having lots of fun! Enjoy!
Blogtrotter, with a new post for you!!

Haggis. I lived in Glasgow for a year, and haggis tasted great over there, especially after many drinks.