We went to the opera on Tuesday night, but for the first time I was a little disappointed. Maybe it's just me- I don't really care for the old operas done in modern settings. I prefer the traditional lavish costumes and sets, even though Fidelio can sort of suit a Nazi/Communist production. The choral singing was lovely (as usual) and the set design was creatively done with a turning stage and graffiti on the walls. But sometimes the words just didn't match the atmosphere. But even more annoying- the man who sat right behind us with his huge film camera and TRIPOD who clicked, clicked, clicked throughout the entire first act, with a useless flash going off every 10 seconds. Arggggg.... between him and the two elderly ladies who talked to each other non-stop, the first act was really hard to enjoy. Luckily the photographer disappeared for the second act and after gently tapping the ladies on their shoulders, the second act with its cheerier feeling, was much, much better than the first half.
**********************************************
I had a little appointment at the dermatologist this week. Before she began and afterwards this is what she gave me to put on my face to prevent any pain and swelling: 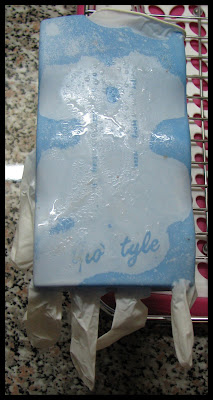 I couldn't help but laugh-- an ice pack inside a latex glove! Great idea isn't it?!

And today we went to the huge "flea" market- yes I actually got bit by a flea on my neck! We discovered a real treasure trove of ribbons, trim, buttons, sequins, embroidery floss etc in a great little shop. However since the electricity was out we couldn't really see anything! Good thing we had all bought these handy little LED flashlights (torches according to my British friends). For only $2 the batteries were also included! Can you read the name outloud?? 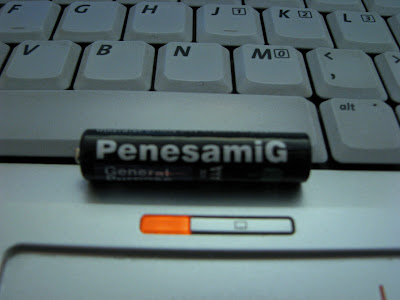 Any resemblance to PANASONIC???

This would make a great pair along with the KADOK film we purchased last spring!

Hi Kim!
thank you for your comment on my blog.

Yes, the battery does bring back memories. We should start a collection. And then open our own store and resell them to toursists! Ha!

Hi Kim, Thanks for the comment on Blogtrotter. Left an answer there and a note on your Macedonia trip...
This post is truly amazing, but careful with those Chinese batteries; it was said that sometimes they explode...

Do you think you could send chase a postcard from albania? It's for a geography lesson, they are collecting post cards send from people and then discussing the area:) I KNOW they wouldn't get one from albania:):)

I would email you, but i seem to not have your email address on my hotmail acct...

Also, look at my blog, do you think you'd like to do a flat stanley visit?? you would be great at it, with all your picture taking:) let me know..Cheese would be soo excited to have you do it:)

email me when you get a free moment:)
kimdylanchase at hotmail dot com

I haven't seen this variation before, but in Armenia especially electric watercookers come in brands such as Seamens, Phillips (or Pillips or something ...uh... similar). There's a Braun-like brand as well and a couple more that I don't remember right now.

That is funny, and most people probably wouldn't even notice the difference!
About the opera...How do you find out the schedule? Is it just posted in town? I would love to go to the opera when we are out there for Christmas!

hello Miss Kim, i just saw some of your new pics..and they were amazing pics...Osumi Canyon, never been there. Oh my gosh, my land its so beautifull.
grusse aus berlin :)

GMG... Thanks for the warning! I will take care!
Kim... let me think about that. I would have to figure out how to use the postal system here!

K-dot...Usually we spot the poster on the opera building or sometimes its in the weekly magazine "Cult".

Ados... Thanks for your nice words. Albania is so breathtakingly beautiful in many places!

LOL at the words/translations in other cultures, Kim. I love going to the Farmers' Market in Atlanta for the same reason.

So why did you need an ice pack after the dermatologist? I hope you're being careful in the sun!!

Hi Ginnie... I am really careful in the sun despite the Albanians thinking it's crazy to not have a tan! I have broken capillaries on my cheeks and finally decided to have laser treatments for them- which-- luckily-- seem to be working!