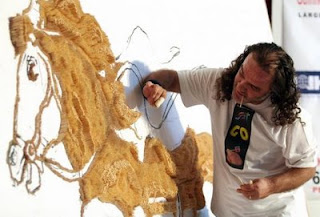 Albanian painter Saimir Strati works on a horse mosaic made of toothpicks at the International Center of Culture on August 8, 2007 in Tirana, Albania. Strati will use around a million toothpicks on a eight metre squared polystyrene board, in an attempt to secure a place in the Guinness World Record with the largest 3D toothpick mosaic. This work will take around 25 days after which experts from the Guinness World Record will give their verdict.
Source: Tiscali News

Wow! That is way cool. He deserves the title, I'm sure.

One day we're going to have to run into each other, my family has been in NFLD since sometime in the 1700's, and I'm from TO too.

Glad you had a great trip, and that toothpick art is something else...I would NOT have the patience for that, what if I tipped over and leaned on it for goodness sakes....