Our second week in Canada has been spent here in Nova Scotia, relaxing in our home in the Annapolis Valley and a few day trips down to the South Shore. My ancestors on my mother's side of the family were one of the founding families of Lunenburg NS in 1752 and there's an undeniable attraction to spending time in this area whenever I am in the province. It's quite thrilling to be able to walk down a street and identify the exact lot that was given to members of your family several centuries ago. The town is full of authentic history and character. I have a dream to one day buy a house there and to perhaps settle down for a while. 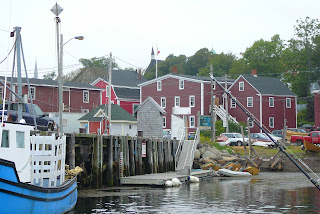 We managed to get everyone to agree to a day at sea doing some fishing. My brother and his two boys, Brad and Tim were all really eager to catch a few sharks, which would have been exciting but alas just didn't happen. On the first stop we immediately caught a bunch of these fish... 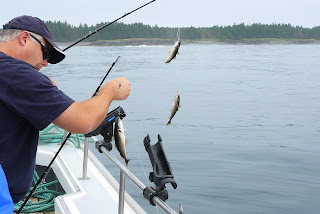 ... the all purpose fish that is used to mimic many other types of seafood such as surimi and crab. They weren't very big but it was fun to catch several on one line!

On the next stop a couple of us managed to catch these incredibly gorgeous babies... 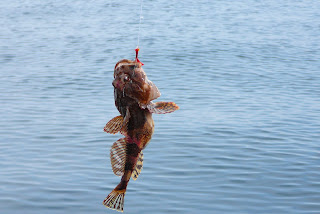 I can't remember the right name for them, but the captain called them "Mother-In-Law" fish. I think they're related to the Scorpion Fish because apparently they have the same kind of dangerous spines. I thought they were really spectacular, even though I didn't catch one myself.
I'm saving the best for last! We went out to really deep water, dropped our lines right to the bottom and within a few minutes were pulling in a good number of nice sized Cod fish. 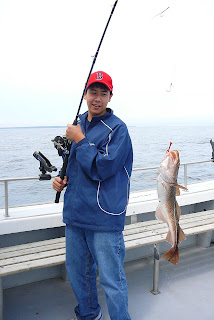 Luckily for us, our whole family loves Cod because we managed to take home a good five pounds of cleaned fillets. The next day I turned the fish into a delicious caserole that everyone raved about, even my Mom, who worried all day that I might sneak some garlic or onions into the recipe! It's basically flaked Cod with Shrimps in a creamy cheese sauce topped with mashed potatoes. Easy to make and really yummy. 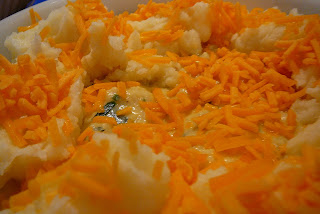 Hi Kim. Glad you are enjoying life at home. We said goodbye to Gary and Helen at the weekend. It seems like all the familiar faces are disappearing. Hurry back.

How fun catching fish, large or small. Nothing quite like the feel of the tug on the line! And that casserole looks incredible, Kim!