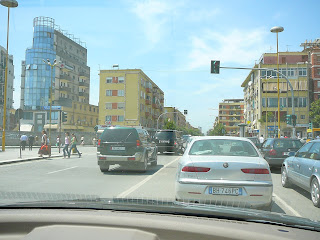 IDIOT drivers on the other side of the solid white line irresponsibly creating hovoc for everyone. You cannot drive across the city without seeing MANY violations of traffic rules.That's just impossible. And it's a rare occasion to drive across the city without witnessing an accident. Yesterday we say two boys on a motorcycle get knocked off. Of course they were NOT wearing helmets (I'm too cool for that), and within seconds the drivers behind the accident were blasting their horns in irritation, demanding that the victims get out of their way. Unbelievable.

In general, in most countries, drivers are normal decent people when they are not in their vehicles, but put them behind the wheel of a car and they become maniacs. I was too slow getting my camera out in the car yesterday and missed taking a shot of the man in the van driving through Tirana with his 3 yr old boy on his lap. I honestly think people are unconcerned with safety and are oblivious to the possibility of losing their own life or that of their child. Our car was hit from behind one morning this week (no damage) by a father with two young children in the front seat with NO seatbelts. The government seriously needs to start a traffic safety/awareness campaign!

I did an informal survey one day last week of seatbelt use and I found ONE person out of maybe ONE HUNDRED had their seat belt ON. Crazy! I think there's a weird law that seatbelts only need to be worn on the highways since I have seen drivers snap them off when they approach the city limits.

I wish I was a traffic cop who received commissions from each ticket I wrote! Yeah!

And here's a very common sign found on vehicles in Albania: 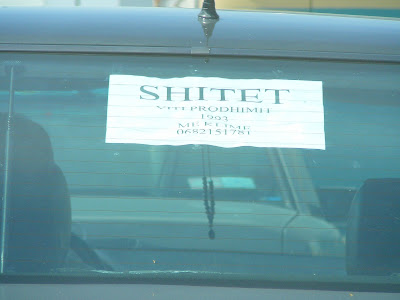 Read it outloud. You know how in many countries you have to post a big letter "L" on your car if you are a Learner driver? We laugh at this sign everytime we see it and nod our heads in agreement. "yep that's exactly the kind of driver you are darling". Nice call.

Here in Armenia wearing seatbelts is for woosies. Real men do not wear seatbelts. And real women are supposed to sit in the back, so no seatbelts for them either.

There are not that many female drivers in Armenia yet (but fortunately, the number is climbing) and unless you're related to the driver or a prostitute, women are not supposed to sit next to the driver. I used to sit in front when I took a taxi, but I moved to the back once one driver couldn't keep his hands to the steering wheel. But that is a whole other story.

I'm sure you know but shitet means for sale

Those people across the line are the #1 problem in Albania. Those are the people who think that rules/laws don't apply to them. They think they are simply more important than the other people patiently waiting on the correct lanes.

It's such a great metaphor for the Albanian society, as this kind of thing is reflected in all aspects of life.... those people make never want to go back to live there...

Its.... and traveller one

I think Albanians would follow rules/laws if they were enforced and educated by the police. No culture was born with laws, they were created and enforced by the goverment, that they (the people)elected. Stop stereotyping your own people ITS, they are only a handful of drivers that ruined for everyone. Make every bad driver pay their monthly income in tickets and perhaps they will think twice when try to brake the law again. The law must be simply enforced.
A.B

I'm sorry but I'm not following you with regard to that sign. What does a learner have to do with a FOR SALE sign?

However you're spot on with your observations regarding traffic in Albania, but at the same time I completely agree with the anonyomous who posted before me. I know that you're from Canada, and I've had the pleasure to drive in Canada in the past and I've seen Canadians speed way over the speed the limit, and I've also seen traffic come to a stand still if there was a cop around. In other words, as anynomous said, the only way to make sure that traffic laws are respected is to have the police really enforce them. Unfortunately, police, especially traffic police, in Albania is a joke, thus all the rule breaking and all the unnecessary accidents.

Hello Albanian in Nova! I was just making a joke about that sign... when I read it aloud it sounds like "Shit-Head" which I often think is an appropriate name for some of the drivers here! (Of course I know it means "for sale")
:)
Regarding traffic cops... everyday you see them clearly ignoring enforcing the law. It's obvious they have no real power, as cops do in many other countries.

I always was amazed seeing children driving out of private schools, that cost at least $10,000 per year, onto major highways, without seatbelts...what the heck do the parents think is going to happen when chickadee's head hits the windscreen?

Haha, my brain didn't make the connectiong between SHITET and SHIT...