Time for a midweek rant I think:

SPIT: What is it with people spitting everywhere in the city?????? I 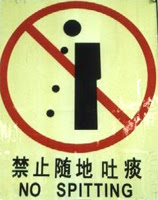 just don't get it. Okay I actually tried to get it but in the end it just can't be understood. At first I thought it was because of the terrible air quality in Tirana and the 45 kg of dust that we breath into our lungs here every year, but then I looked around and saw that it was only the men who spit and women seemed to be able to refrain from the nasty habit. But ohhhh no, the other day my theory was proven wrong when I spotted a well dressed middle aged women turn her head away from her friend and let a nice big blog of spit fly, just missing the shoe of another passing woman. In Tirana you can hardly walk 3 metres without having to step around or over huge globs of spit. Do people not realise how much bacteria and germs is in human spit? I guess they don't think about that spit on their shoes being smeared all over their homes where children are playing on the floors etc. Okay, now you know how I feel about spit (and not just in Tirana but anywhere).

CROSSING THE STREET: Why oh why can't people understand the concept of obeying the green man/red man lights when crossing the street?? In Tirana almost no one follows this simple concept and we have even seem parents holding their children's hands tug them across the street while winding in and out between moving cars. I remember when our kids were toddlers and we spent hours teaching them how to cross the street safely until they understood that waiting for a green light would keep them safe. I read recently that here in Tirana several people are hurt everyday when they are crossing the street. I have to admit that just waiting for the green light doesn't guarantee your safe crossing here in Tirana, because even then you have to be 100 % alert to the drivers who are going through red lights (basically this happens at every RED light). I quickly learned this trick and it sure does work. But I still stand on the curb until the light turns green before I attempt to cross. Okay, honestly this only works during the hours when the traffic lights are working! When the lights have no power it is a virtual free for all, even if a traffic policeman is manning the intersection.

BEEPING HORNS: Tirana was recently named the noisiest European capitol city and it's probably not an exaggeration. Horns beep almost 24 hours a day in the center of the city. It's a fun hobby to try to understand the language of horning! There's the "hello, I'm right behind you" horn, the "you're doing something wrong" horn, and the "get out of my way don't you realise I'm important" horn. I'm thinking of getting myself a horn to beep while I'm walking.

BURNING TRASH: Because Albania's 3.5 million people still don't have a single wastewater treatment plant, toxic-waste disposal facility, or sanitary landfill people often just burn trash wherever it starts to pile up. A few weeks ago we watched from a restaurant window in a trendy area of the city as a trash fire grew uncontrollably, eventually burning its way up a tree. People stood around as if it was entertainment, and when we asked about what was being done to stop it, we were told "It's Albania" and given a shrug.

I could go on... power cuts, cruelty to dogs, not using seatbelts for children etc etc... but enough.

Lately I've been thinking a lot about the concept of a "Civilized Society" and what makes a city a good place to live in. "Civilization" implies a certain level of sophistication and refinement, and a level of comfort and safety for all members. Just because Tirana hasn't reached a high level of civilization doesn't mean it is uncivilized. It is definitely on its way to becoming a good place to live, but the improvements are so slow to come. Tiranians deserve better, but in the meantime, the people suffer.

I would define a civilized society as one that had, as habit and manner, concern for others rather than a single minded pursuit of the self. This goes from litter, to giving seats to the elderly, to spitting to greater cultural issues. A culture that not loves kids, understands them and accomodates their needs. Same for seniors. This rules out some societies that are generally viewed as civilized. I don't think it has to do with an economic lack of infrastructure, so much as an attitude.

Oh for sure that's an important part of the definition! A civilized society is a benevolent society in which the needs of the citizens are recognised and met. It's actually very hard to think of even one so-called civilized country that actually is. What we call primitive societies may honestly be the more civilized.

Hi Kim,
Great reading, I can relate to all here in Mumbai, noise, spitting and here they chew that red nut so all over the place you see these big blobs of red!
Will try call soon.
Love Diamond!!!!!

Great post, Kim, of what are the simplest of "evils" that can disturb our way of life. Does it take traveling outside their world to understand how things really could be better?

Interesting post...I see a difference in civility between Germany and the Netherlands. It seems the Dutch are just nicer people than the Germans. Maybe because I lived in Duesseldorf and that area of the country they are ruder??

Re: crossing in traffic. I suggest you get a scuba spear gun, wait for the green man, and then if someone bears down on you running the light, shoot his tire out.
James, I went to Dusselforf and was treated delightfully. Maybe you need to be female?

Ewwww Diamond-- red gobs would be worse!
Ginnie-- I think that more outside contact might help improve the situation. However over the holidays there were 1000's of emmigrants back in the city and they seem to revert back to the local customs.
James-- hey I lived in Holland and believe me there are a few rude people there as well. But sometimes the dutch call their rudeness "bluntness".
Judith-- my friend Anna says she now considers crossing the street here her newest "Extreme Sport"!!

The "developing world" (where I live, too) is sometimes a nice way of describing an uncivilized place.

SHANGHAI, Jan 27 (Reuters Life!) - Foreigners are spewing bile at China's latest plan to curb spitting in Shanghai, the country's financial capital, which is slated to host the 2010 World Expo.

Authorities here -- eager to put the city's best face forward while under the international spotlight -- plan to distribute 45,000 "spit sacks" to Shanghai cabbies, to curb the common habit of rolling down the cab window and expectorating onto the street.

But the proposal has foreigners spluttering with rage.

"This solution is a recipe for disaster," seethed one reader in an email printed in the Shanghai Daily on Saturday.

One of the many risks of the plan -- which involves fixing a sack to the metal grill which surrounds the driver's seat -- is that the bag may spill and unleash the "malodorous aroma of spit," the reader added.

Another respondent said he was afraid drivers might toss the bags out of their windows and be encouraged to hawk even more.

Local authorities are stunned by the livid reaction, the paper reported.

"We will persuade the drivers not to spit in the presence of passengers, and consider stabilizing the paper bags in unnoticeable corners near the driver's seat as improvements to our plan," health promotion campaign official Ni Yanhua was quoted as saying.

The "spit sack" follows an earlier innovation in Shanghai's public hygiene, after the city attached spittoons to garbage cans on sidewalks.

The spittoons were not seen as a success, since residents mistook them for ashtrays.

Anonymous-- thanks for such a fascinating story!!!!!!!