I was browsing for some new books at our local International Bookstore here in Tirana earlier this week and I found a very special coffee table book called "Albania: Travelogue No 4" by a woman called Aliki Tombrou, a talented artist and writer. Aliki has also done similar books about Greece, Jerusalem, Istanbul, and Thraka, all of which I'd like to take a look at. She was born in Athens and studied art in Paris, and I just love her style. The writing that flows through the book is beautifully poetic and shows great love and respect for Albania. 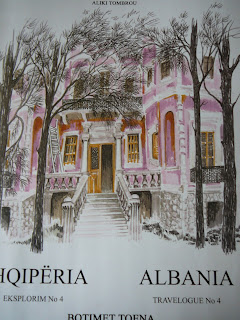 Korca
"The appropriate details in their architecture,
influenced by 19th century styles
but also purely Albanian elements
on the urban homes at that era,
with the colors of ochre which have seen many winters,
decorate the squares and central roads.
The city has a melancholic beauty woven into its very fabric." 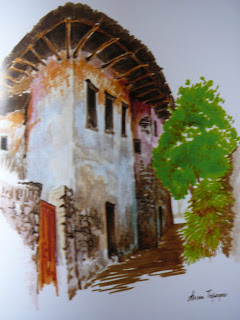 Shkoder
"If you ignore the classical image of the miserly apartment buildings,
the city astounds you with the pleasant broad streets,
the colored buildings which house various institutions,
the rows of trees and small parks." 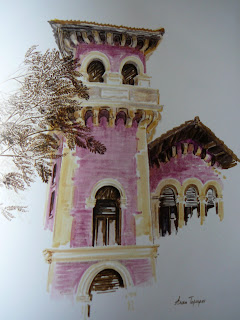 Tirane
"This is the heart of the city.
One of its hearts, because a city like this,
with an especially strange character,
a European and Eastern city,
has many concentric circles which vibrate to their own rhythms." 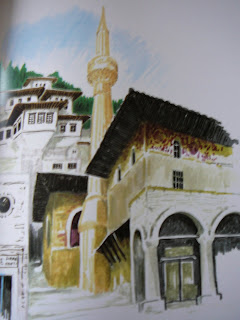 Berat
"The city is a panorama on various levels,
on this bank of the river perched on the high hill,
which is crowned with by the castle loaded-I would say-on it.
With the houses close to each other, asking perhaps for protective security,
with a medieval expression although they are structures from the past 2-3 centuries."

"The face of Albania is hard, but it is beautiful."
Aliki Tombrou