We've been home for 4 days already and I know you're all waiting patiently for the review of our wonderful vacation through Italy and Croatia, but it's been a hectic week. We're dealing with power outages once again- they rotate the outages from zone to zone, starting at 9 am and usually ending by 9 pm. One improvement from last year's outages is that they are now always starting at the top of the hour and always last precisely 2 hours. So all day you get these 2 hour windows of opportunity to get things done. I finally have a day with nothing major on my agenda, so I'll try to sum up last week's trip. In a word it was "Fabulous"! The highlight for both P and myself was spending 2 days with Cyndi and Danilo from Re-boot. They're such warm and fun people and we immediately felt like longtime friends. But more on that later! Let's start from the beginning.

Fri. Nov. 24th
We left Tirana and drove to Durres, one of the port cities of Albania. Despite some advancements in lighting, Albania is still quite a dark country and the streets are poorly lit. Finding the entrance to the port was a bit of a challenge 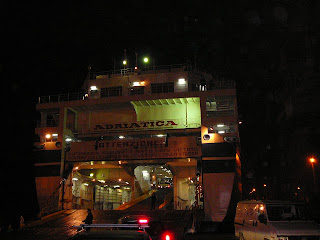 for us but after stopping and asking directions a few times, we finally made it. There are no signs instructing you on how to proceed but there are certainly enough "police" standing around with whistles to let you know when you're doing anything the 'wrong' way. We both heaved a sigh of relief when we drove into the bowels of the huge ferry. My relief lasted but I don't think P's did. I had to get out of the car while he manoeuvred it into the parking spot, which meant backing up a steep and very narrow ramp and then fitting our rather large Murano as close as possible to the other vehicles. P thinks he may have been the most frustrating driver the attendants ever had to deal with but I reassured him that "of course there were much worse!"

I hadn't realised that the ferry was operated by an Italian company, so that was a nice surprise and we immediately felt like we were on vacation. Everyone 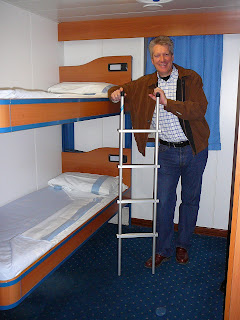 from the receptionist to the bartender were pleasant and helpful. When we unlocked our 'double deluxe cabin' we both started laughing because we hadn't expected bunk beds. "Lux" it probably wasn't, but it was clean and comfortable. We went and had a few drinks, watched TV for a bit, and went back to our cabin to sleep. I was happy to find that you don't really notice that the ferry is moving and the trip across the Adriatic Sea was very smooth and easy. We woke in the morning to the sound of the horn and then the captain's voice announcing our impending arrival in Bari, Italy. We dressed and went for a coffee and waited in the crowded hallway for the disembarkment to begin. Everything went smoothly and in no time at all we were driving through the city and on our way across the province of Puglia.

Wow! I wish I could travel like you do. Unfortunately I am never comfortable when I travel, and I long to be back home again!!

I didn't mean to sign in as "anonymous" above - hit the wrong button! It's Sonja over at Quantum Leaps! Thanks for visiting me yesterday. You certainly have an exciting life. How often in a year do you travel?

I LOVE reading about your adventure in Italy! It was sooo nice to meet both you and P. Hope you guys will come back SOON and stay a while with us, 1 and a half days was just not enough!

So glad to start hearing about your fabulous trip, Kim!