I am so glad that I'm on the last day of our recent trip through Italy. Finally!
Sunday Dec. 3 2006
The drive from Dubrovnik Croatia south to Tirana 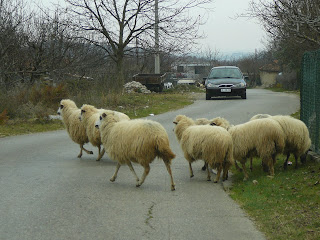 Albania was probably the weirdest part of the whole vacation, mostly because of the very interesting road we had to take. After the modern highways through Italy and most of Croatia we were a little surprised by the Albanian road we ended up on in the north. A flock of lovely sheep forced us to stop for a bit while they took their time crossing the the road, but a little further up the road the dusty donkeys just stood staring at us.

We spotted a car with Tirana plates on it and thought we would try following them to the border. It sure didn't feel right though! 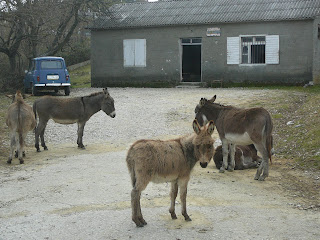 The road, as you can see in the photo, was basically a one lane dirt road over the mountains, passing through some very small villages. I mean really small- maybe 2-3 houses snuggled together. We really thought we were on the wrong road and we both got very nervous when the car we had been following stopped at a tiny bar. Ohhh no, we thought. We pulled up behind them and in our almost useless Albanian we asked them if this was the right road to Albania. They nodded and pointed ahead. "Po, po" which means "yes, yes". So we continued. After a while we thought they had been pulling our legs because the road just got worse and worse. Again we stopped and asked two old shepherds and they motioned with their arms for us to keep on going. Sometimes you feel like people just want to not have to deal with you. Two shiny SUV's from Tirana passed us and we tried to keep up with them. It looked like a good sign, and it was.

We reached the border, looked at each other and laughed. 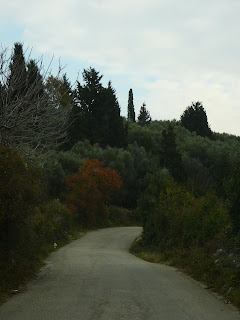 It was the funniest little border crossing we'd ever seen. There was a thin bar which had to be raised by hand for each car to pass through, and perhaps 5 or 6 tiny wooden huts on both sides of the road, all in varying stages of decay. In front of us was a huge, black Mercedes taxi driven by a very colourful, raven haired gypsy woman with at least a dozen gold hoops in each ear. The border guard approached our car and asked for our papers and passports. When we handed them to him he gave us a huge smile, which we really appreciated. We had the feeling that he had been expecting us for some reason.

It didn't take long and we were on our way again, leaving the taxi and the other SUV's behind us. We didn't, however, relish the idea of being in 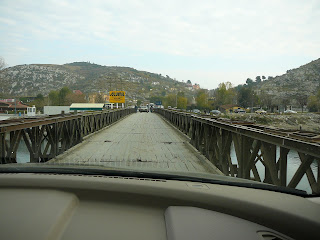 the lead here, so we drove slowly until the others passed us. As I remember it, the road to Shkodra was pretty bad, but from there to Tirana the road was okay, but not fabulous by any means. Peter knew but hadn't told me about the lovely wooden bridge we had to cross at Shkodra. We drove along the river and I kept shaking my head at the poverty and living conditions in this area. Suddenly we turned right and were on this bridge. I gulped and grabbed my camera, wondering if we would survive the trip across. I snapped this photo and then covered my eyes with my hands, praying the bridge would hold up just a few minutes more. Of course, we made it, and it's still standing today, but it would certainly improve things in this country if a new bridge was built. The rest of the drive was very busy but uneventful, and we arrived home in Tirana late in the afternoon, surprisingly muttering "Home, sweet home" to ourselves. After more than 2400 kms. and 9 days on the road our wonderlust had been satisfied (for now).

Well, that was a lovely finale. It's funny how many things this country needs and the bridge is just one of them.

You didn't mention if the deserted road going into Albania was through Montenegro or what...

Anyways, I know the feeling of peaking your travel needs, when I did 5000 km by car through northeast Canada, this past September... I have reached my quota for 2006. I would definitely love to do that same road through Italy and Croatia at some point in my life though...

Going across that bridge is possibly one the most heart-stopping moments ever, and not in a good way. Absolutely hated it and every journey was accompanied with prayers it wouldn't collapse right there and then.I hadn't thought about it for such a long time until I read your post.

And you are right Kim, the surrounding area, where the mostly gypsy population lives is a disgrace, so sad to see such deprivation even before setting foot in the town.

God Damn, it feels like I travelled 100 years back in time. That bridge I would not cross it again if I were you.

Hey ITS... Yeah you spotted the one thing I forgot to mention- Montenegro! It sure was that road!
London Lily... I could easily drive on huge high bridges without even thinking about it but this bridge (perfectly level with the ground) gives me the heeby geebies!
Anon... in some countries (like Albania) the thrill of living here is just that- we are often faced with things from 100 years ago!

My grandparents lived in Shkoder, and I often used to stay with them during the summer when I was little. I remember crossing the bridge with my uncle who would take me to Shiroka. I used to close my eyes each time I crossed the bridge, I was terrified. As I got older, I started to like crossing that bridge, I loved the wholes in it which allowed me to see the green water underneath. I am surprised that it still stands, I would love to walk on that bridge again.