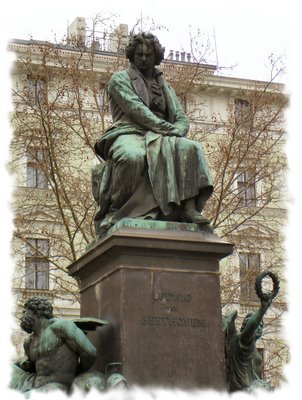 Last night as we walked to TGIF's we spotted this impressive statue located in the Beethovenplatz (Beethoven Square), just one block from where we are staying. Here's a bit of info which I've taken off the internet:
This statue of Beethoven was erected at the Beethovenplatz, near the Konzerthaus, in Vienna.
It was commissioned by the Vienna "Friends of Music" just after the Beethoven's centenary.
It was unveiled on May 1st 1880. Since then it has been moved due to the clearing of the base of the Danube.
The sculptor Caspar Clemens von Zumbush created this statue in bronze.
Luckily for me, Wednesday evening happened to be "all you can eat ribs and wings night"! The wings were loaded with hot sauce and the ribs had a lovely sweet and sour BBQ sauce. We also lucked out on 'happy hour' from 5-7 pm with 1/2 price cocktails, and since it's an American chain we both had a couple of Bloody Mary's- yummmmmy. Ceasars would have been better but you don't find Clamato in many places outside Canada.
Now P has gone to his conference and I'm on my own. The skies are overcast but I'm up for a good walk about. At least it's not raining-- yet!

I have a great program called "Jasc Paint Shop Pro Studio" where you can do some fancy things with your photos. Sometimes I remember to use it! This particular effect is from the "Frame" selection.

Awww. I have a feeling PhotoShop has something similar but I had the same question as ET. It really is a lovely effect.

I'll have to ask P to help me out with that. Thanks Kim!