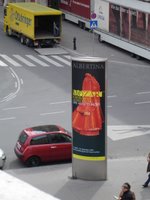 I started my day with 'breakfast' in our room- though how it can be called 'breakfast' I'll never know- a couple of buns with butter and jam, and a pot of so-so coffee, but oh well, it was okay. P went off to his conference and I went out exploring. It's cold here in Vienna, compared to Tirana where Spring has already sprung.

I headed out to my favourite museum in Vienna, The Albertina, which is hosting a wonderful exhibition in honour of "The Mozart Year 2006". I am always amazed at the cleverness of the curators of this museum. Everything is so fresh and alive and the displys are so beautifully presented. There were throngs of schoolchildren in the museum, something I heartily approve of. They sat in circles around the guides, listening keenly to the explanations. How I wished to be a child again and to have teachers like these ones who shared what they knew with such joy. 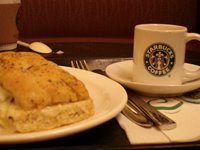 After the Albertina I stopped at Starbucks and had a double espresso and a foccacia with vegies and then headed back out into the wind to look for a few of the grand sculptures Vienna is famous for. 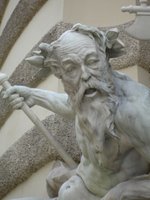 Some are modern, like those just outside the Albertina, and some are from the Rennaissance period. I particularly love the sculpture and fountain at the Michaelerplatz (1895-97).I really love the dramatic expression! Apparently it represents the overwhelming power of the Hapsburgs in Europe. 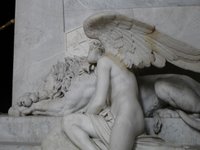 I also stopped in several churches and found a few gems there as well. Isn't this one lovely.... an angel hugging a lion!


Here's a shot of the sign over the Black Camel Shop on the Bognergasse: 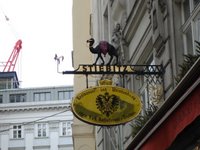 This old spice shop was founded in 1618 by Johann Baptist Cameel (a relative of his named the Camelia flower!). Both Beethoven and Lord Nelson shopped here in their day! I wonder what spices Beethoven liked.

I stopped in a few more churches including the Stephansdom and the Fransican church before wandering down the Weihburggasse to one of my favourite shops in Vienna, called "Die Vermischte Warenhandlung" (can someone translate that for me?), and then to the British bookstore (I always stop here!), and then to Tiempo, a spicy little tapas bar/cafe/bookshop where I had another quick coffee before heading back to the hotel (with very tired feet). 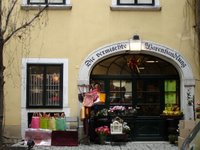 I love the camel sign. And yeah I guess they've had crazy weather in Italy, Switz and Germany lately.. Spring just doesn't want to show up. Who's slipping on their job again???

I love the sculptures... keep the pictures coming. Its funny as a Canadian non travellor to imagine that you go to austria to eat ribs but I don't get out much.

BTW do you speak german or do you get by in english?

I can really see that you and I gravitate to the same things, Kim, when travelling. And it looks like we're in the same situation--when the cats are at work, the mice play :)

I did a translation look-up of "Die Vermischte Warenhandlung" and came up with "the mixed goods action." Christina would be better at the correct way to say it, I'm sure!

I loved clicking on all the pics to get the full impact, esp. of the angel lying next to the lion!