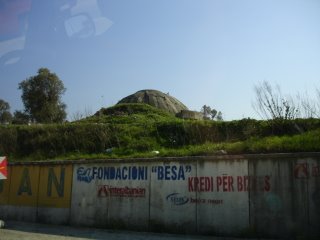 In case you don't know... There are apparently over 700,000 of these concrete bunkers placed strategically all over Albania, one for every 4 Albanians. They were built by Albania's dictator Enver Hoxha, who feared invasion from all corners of this tiny country. They're still here, being incredibly difficult to get rid of. They were made to hold one soldier and his rifle, and let me tell you- they're everywhere! And so, because they are invincible, people just live around them, or in them, or they decorate them with 'art'. I found this quote on CNN and I think it sums up the situation perfectly:

"They are indestructible symbols of what led to the explosion of anger in
Albania, a place the world forgot for 50 years. But all the bunkers, built to
keep invaders out, weren't enough to protect this vulnerable country from the
enemy within. " 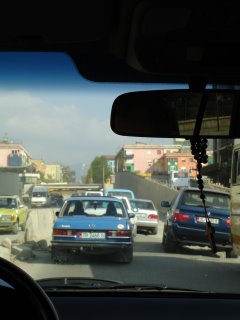 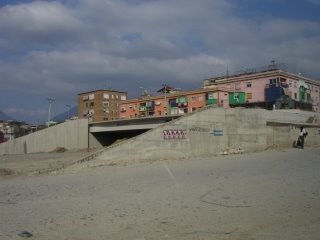 Now these two shots above are of the supposed NEW overpass that was begun over 8 months ago! Something happened while I was away this winter and it came to a complete standstill. Now it's just a horrible mess in the middle of one of the busiest intersections of the city.

oh wow - it's great to finally see more photos of your city. I'm still curious to see more of what everything looks like since I don't plan on visiting any time soon.

During the past months, work has been suspended on that overpass and the governement is planning on destroying it and restoring the place to the way it was.

One side, the new government, claims that the object is illegal, non-safe, and unnecessary.

Some European parliament folks came to investigate (including Di Stasi), and they seemed to side with Edi (according to their speech).

Personally, I believe Edi more than Berisha, too.

Anyway, it has been a pointless conflict and the only ones that are suffering are the people that have to pass through that intersection every day.

ExT... I'll keep posting shots of Abania for those who don't plan on coming here anytime soon :)
Genti... thanks so much for your good explanation about this construction/destruction. I'm on Rama's side on this (as on most issues). I think he cares about the city.