To Write or to Photograph?

A few weeks ago when we were in Vienna the Big P and I walked through the Stadtpark and sat on a bench ready for a bit of our favourite passtime- people watching. It was a perfect sunny day and the tourists were busy taking photos of everything. We laughed when we watched a group of three Japanese ladies taking photos of each other. They had spotted a trio of extremely elegant, elderly Viennese ladies sitting closely together on a bench, and proceeded to sit themselves down beside these ladies and take photos of themselves. They inched themselves closer and closer until all of them were in the picture, but of course they didn't let the Viennese ladies know what they were doing. I can just imagine the giggles they will share with their friends back home in Japan! 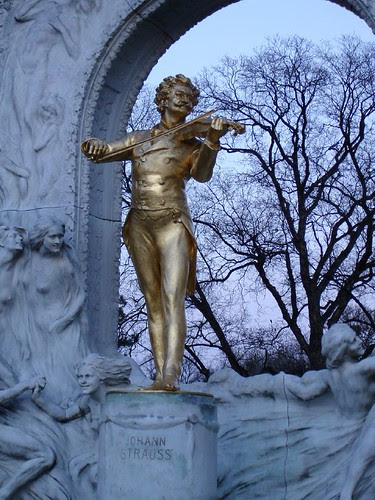 We watched another oriental couple with their cameras. We were near the Johann Strauss statue which is probably the number one spot for picture taking in the park. The couple took turns posing in front of the gold statue. One would pose and the other would snap. Then they'd both run to the camera and review the photo. If they weren't satisfied, they'd do it all over again. It was quite funny because they had two or three different poses that they seemed to choose from. He would put one hand on his tummy and one behind his back- sort of like Napolean, and she would fold her hands together in front of her tummy or behind. There didn't seem to be any other variations allowed. When they moved on to another area of the park, we decided to follow them, and yes we felt a bit like spies! And again they did the same things- the pose and the snap. It occured to us that they were not actually looking at the thing of interest behind them. We imagined the conversation they might have when they got back home: "Ohhh look at that statue behind me! How did that get in the picture??" and so on.

Nowadays you NEVER see tourists without a digital camera around their necks. Everyone seems to run around snapping shots of anything and everything that looks 'pretty' or interesting. I rarely see people stopping to honestly breathe in their surroundings and take it all in. It's harder I think. Harder to put it into your memory for safekeeping, harder to take out a notebook and put it in words. I'm as guilty as the next person of snapping photos of everything, but it feels lazy in some way. When my daughter was here I noticed that she brought a notebook along with her and spent time everyday writing down her thoughts and feelings of what she had experienced that day. It impressed me. Yes a picture can be worth a thousand words, but aren't a thousand words sometimes more beautiful than the picture?

I found this quote in the book I am reading and I think it sums up what I am thinking about quite well so I'll share it:

"That winter I acquired the habit of never using a camera. It forced me to work harder, writing down every detail. Photographs can be passive and reductive. They allow us to recall too easliy, omitting from view what is behind the camera, and to the sides of it."

From Mediterranean Winter by Robert Kaplan

What do you think?

I am an amateur photographer, and I do not go anywhere without a camera. I like candid shots, and well composed ones. I am so visual, it makes sense to me to try and capture everything, yet I know that I get a narrower view when I am behind the lens. On my first trip to europe I had a camera, but it was a 35mm and I used it sparingly, I had a journal too, and it is full of my impressions as well as many sketches. I love the journal, but it is very personal, I would not share it. Like my moleskin, it is always in my bag, and it is for my eyes only.

I find I do both...and for different reasons...I find that having the camera opens my eyes up to detail, reminds me to observe...but I also tend to take photos of that rather than a photo of my kid/husband/mom in front of X monument....

Writing allows more introspection, and I can sketch too...

They are different, and not mutually exclusive...one just needs to be mindful in either instance...

Writing well and taking a "good" photograph are both valid and demanding activities. Photo-essays can be just as vocal and partial and inaccessible as personal thoughts when written down. One can be just as lazy and ignorant in the process of writing as when rushing to take that next snapshot of some landmark.

Hi Kim. I know exactly what you mean. Here in Munich where everything is new I'm still finding it much harder to write about the place than take pictures of it. Hence all the photos on my blog.

Of course it could also be because I acquired a new camera recently and it's always more fun to play with a new toy.

You also have to bear in mind that a lot of people who do write stuff on their blogs need to learn to how to write about something other than themselves. Too many of the blogs I discovered that were supposedly about Munich were actually all about the person writing.

I know this kind of blog is popular with some, but I want to know about the place - and the person's experience of the place - not what they had for breakfast or their latest row with their boyfriend.

i love to photograph dear Kim , it makes me express my self much better.and a good photograph makes me write something good as well:)

It's a good question for all us photographers, Kim! I used to write every day in my journal for years but don't do it any more. Now my journal is my camera. I don't do both right now. Nor did I do photography back then. It's like it has been either or, not both and.

However, I have many a time said to myself that after I take my pictures, I need to just stop and smell the roses, with the camera at my side. Especially if I have the time to do so!