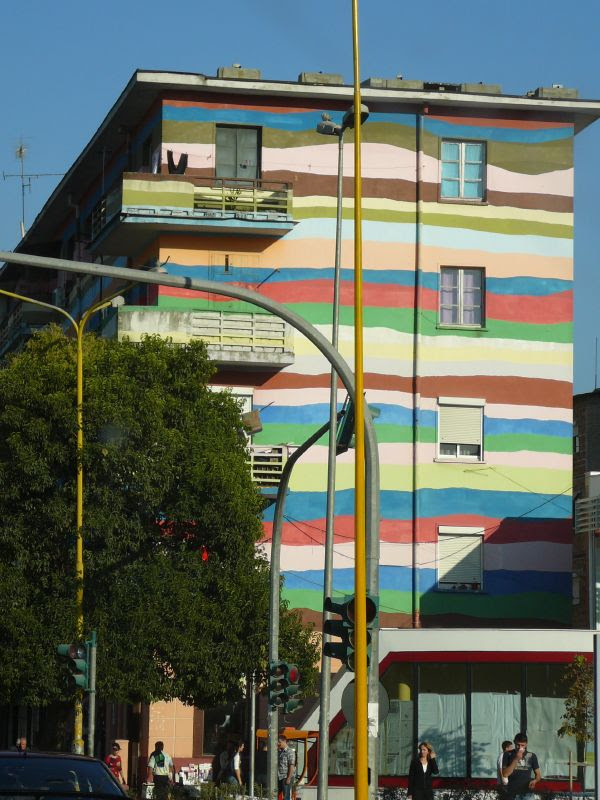 We may not agree with the way that Edi Rama (Tirana's Mayor) runs the city, but in the following speech he describes his way of looking at cities and poverty, and the philosophy is similar to my own way of thinking on this. Poverty doesn't have to be ugly. We should and can find beauty in even the poorest situations. This is something I've personally found in some of the most destitute orphanages in Romania, in the middle of Roma state housing, in hospital wards full of kids with the most horrific cancers, and in prisons overflowing with men with no hope. If your eyes are open you will find the beauty. And that beauty can lift all of us out of sorrowful situations.

Many of Tirana's buildings have had a facelift. I lived with colours from the moment I was born.

As an artist I was involved in the democratic movement, as a professor in the academy. I was leading the students rebellion against the old regime.

When I became mayor of Tirana it was like entering a Kafka book and becoming a person in danger of becoming totally metamorphosed by the very heavy power of the past and of the total lack of authority and hope in the city.

Tirana was totally left behind and was very similar to a transit station in that everybody was thinking of how to escape.

It was the greyest, dustiest, most hopeless city ever imagined.

Every free piece of land was seen as a space to be occupied, so all the parks disappeared and every building was in like a permanent state of pregnancy because every building got bigger and bigger.

Whether it was cafes, restaurants, shoe-fixing stops - whatever. People that were in the middle of this sandwich they just transformed the balconies to create additional space which is why you cannot see two balconies that are the same in this city.

So there was an intense time of regaining the sense of the private space because nature which was beautiful was seen as the property of the enemy - the state.

So everything was ours yet nothing was ours, even our own self was not ours. The city became a catastrophe in terms of public spaces.

So when I was elected expectations were very high and people were fed up. So we started with colours.

I will never forget the first square metres of orange that appeared in the middle of the grey. People had never seen somebody taking care of a space that was not private.

Suddenly they saw some people painting a building at the entrance of Tirana and after ten years it was the first time people were discussing things about the city it was great, intense.

You can imagine the poorest country in Europe talking about colours. It was like a café in Montmartre and there were many voices for the changes and many voices against it .

So we asked people whether they liked the painted buildings and do they want it to continue or not.

And we felt a change in the structure of discipline like police we started to see incredible safety stops taken off the heavy horrible grids that dominated the city and people started to re-create their facades started to think about design.

The most important thing was how to appeal to the others, to think about not only what we have but who we are in front of the others.

So slowly the city started to search for a balance between what we have and who we are. And this was important.

Rama says Tirana is no longer a "transit station" .

We started to demolish more than 5,000 illegal buildings alone from the river banks that you can see now.

We have moved 123,000 tonnes of concrete, demolishing more than 450 illegal buildings from one to eight floors.

There were many critics saying "ahh this is just façade, this is superficial, this is nothing, poverty is behind this façade", yes, but being poor does not mean that you have to be ugly.

On the contrary poverty should have a dignified face. Tirana is a woman and should be beautiful, should look towards the future.

So now we have to face all problems that reasonable big city has and to improve the quality of life.

Only six or seven years ago young people lived here as if at a transit station just thinking about the possibility to leave through whatever means.

Today Tirana is a place where young people have hopes and opportunities. Of course there not enough of either yet but we have opened a perspective which should be improved through the new politics of change.

I would say that I am somebody that is trying to use politics to make the best out of it for the good of my city and my people.

I'm totally moved by the whole article, but the last sentence gave me the last knock...

I remember the times like 15 years ago when I used to like a lot what he used to write. But it seems that the metamorphosis he talks about has happened, unfortunately...

I can't believe he's still milking this. The colors were big news around 2002.

On a side note Edi Rama is one of the biggest crooked politicians in Albania. This, I know on a personal level.

"People had never seen somebody taking care of a space that was not private."

To me that is such a key sentence and one that is valid for the major part (if not all) of the former communist societies. The surroundings of apartment buildings, their staircases and lifts will look run down, dirty, with trash carelessly thrown around, but once you enter someone's apartment you enter a whole different world: one that is clean, well taken care of (at least as much as is within the financial possibilities of the inhabitants). People just don't give a sh** about the world outside their own living space and throwing your garbage from the balcony, in the river or on the street is done without a second thought. This attitude is something I really hate in the people in Armenia.

It's not just former communist societies that suffer from the disease that the late great J.K. Galbraith summed up as "Private affluence and public squalor". It's just as much a feature of boom capitalism. To spin Kim's comment, neither in poverty nor in affluence should we have to accept squalor in place of beauty.

akvll... yes, sadly I think you're right about this

its... it could be an old speech? I don't have experience with him being a crook... but I do know that he's not a very pleasant person and has some very bad manners

myrthe... me too- is it just a matter of education?

Thanks everyone for your contributions!

I love this photo. Thanks you for sharing it.