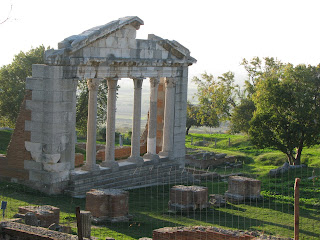 The Bouleuterion (Administrative Center)
The ancient city of Apolonia is a real Albanian treasure! Founded as a slave trade port by the Corinthians in about 600 BC, it maintained an important status for centuries, before falling into ruins. The building in the photo above reminded me of the Parthenon in Athens of course because of the lovely columns, though it has only 4 while the Parthenon has 8 across the front. They are probably about the same age historically.

The most wonderful thing about our little gem is that there are virtually no tourists (especially at this ime of year), and we had the entire park to ourselves, along with a local guide. 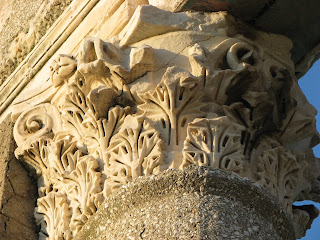 A Beautiful Corinthian Column
Aristotle considered Apollonia an important example of an oligarchic system, as the descendants of the Greek colonists controlled the city and prevailed over a large serf population of mostly Illyrian origin. The city grew rich on the slave trade and local agriculture, as well as its large harbour, said to have been able to hold a hundred ships at a time. The remains of a late sixth-century temple, located just outside the city, were reported in 2006; it was only the fifth known Hellenic temple found in present-day Albania. Apollonia, like Dyrrachium further north, was an important port on the Illyrian coast as the most convenient link between Brundusium and northern Greece, and as one of the western starting points of the Via Egnatia leading east to Thessaloniki and Byzantium in Thrace. It had its own mint, stamping coins that have been found as far away as the basin of the Danube. (Wikipedia) 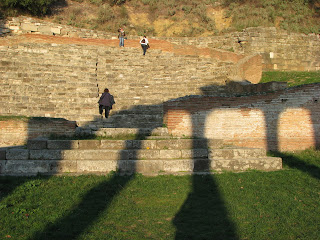 The Steps of the Theatre
The city was for a time included among the dominions of Pyrrhus of Epirus. In 229 BC it came under the control of the Roman Republic, to which it was firmly loyal; it was rewarded in 168 BC with booty seized from Gentius, the defeated king of Illyria. In 148 BC Apollonia became part of the Roman province of Macedonia, later being incorporated into the province of Epirus. In the civil war between Pompey and Julius Caesar it supported the latter, but fell to Marcus Iunius Brutus in 48 BC. The later Roman emperor Augustus studied in Apollonia in 44 BC under the tutelage of Athenodorus of Tarsus; it was there that he received news of Caesar's murder. (Wikipedia)


Apollonia flourished under Roman rule and was noted by Cicero in his Philippics as magna urbs et gravis, a great and important city. Its decline began in the 3rd century AD, when an earthquake changed the path of the Vjosa river, causing the harbour to silt up and the inland area to become a malaria-ridden swamp. Christianity was established in the city at an early stage, and bishops from Apollonia were present during the Council of Ephesus (431) and the Council of Chalcedon (451). However, the city became increasingly uninhabitable as the inland swamp expanded and the nearby settlement of Vlora became dominant. By the end of antiquity the city was largely depopulated, hosting a small Christian community which built on a hill which probably is part of the site of the old city the 13th century Monastery and Church of Panagia -Shën Mëri in Albanian- (the Saint Mary). (Wikipedia) 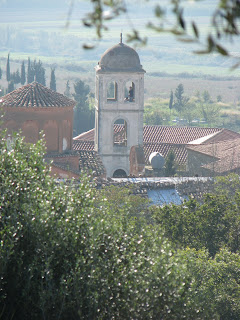 Kim your photos are more and more beautiful each time I read your blog. You ought to publish in a travel magazine.