A Visit to Shkodra 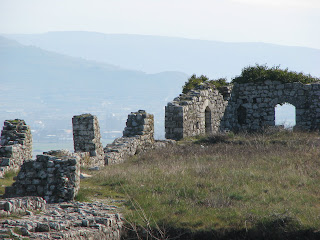 On Monday we made a trip to Shkodra (or Shkoder), an ancient city in northwestern Albania, very close to the border with Montenegro. We left at 7:30 in the morning, filled the day with lots of fun, and returned to Tirana by 8 PM. It was another day of uphill walking and lots of amazing sightseeing. The city itself was founded in 4,ooo BC, and was occupied by the Romans in around 168 BC, when it became an important trade and military route.

The Rozafa Castle is located on top of the highest hill in the area and the remains of the walls of the castle are still standing. It was a cold but clear day and we were virtually the only visitors! 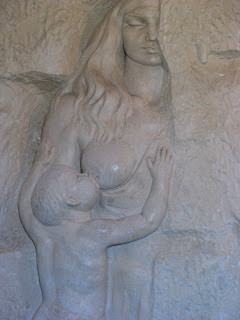 "A very interesting legend explains its history. The main theme of the legend has to do with keeping of promise. Rozafa the bride of the youngest of
three brothers was walled up in order that the walls of the castle do not fall down by the night. The water passing through the stones at the main entrance are
connected in the folk fantasy with the water going out from the bossom of Rozafa, which she left out during the time she was walled up in order to feed
her little baby." (Wiki) 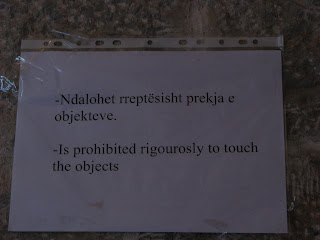 I loved this sign which was hanging in the Castle Museum!

We also visited the Marubi Photo Studio, had lunch at the awesome restaurant "Tradita", and visited the Ethnographic Museum. 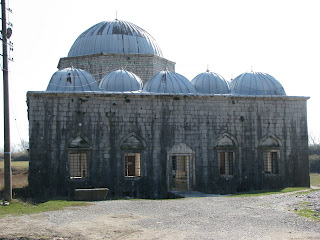 From the castle you can see this mosque down in the valley, so we drove down into the little village and found our way to get a close-up view. It's called the "Lead Mosque", I assume because of the domes. It seemed quite deserted and probably no longer in use, but it sure had a lot of character! We peered inside the windows and could still see old prayer carpets laid across the floor. 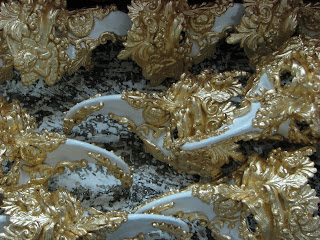 No trip to Shkodra would be complete without a stop at the Venetian mask workshop where they are busy making almost 80% of the masks which are sold in Venice! Everything is done by hand here, the end product being a truly special piece of art. I bought one of the classic masks, called the Dottore Peste or the Pest Doctor. It would have been worn by doctors in the 14th century who were treating patients who had the pest (plague). It has a long nose, like a beak and it would have been stuffed with herbs to prevent the doctor from smelling the rotting flesh, and the length of the nose would have kept him at a 'safe' distance from the disease.

Would they have been so beautiful? The masks that is...I assume not.

I really like your new look here, Kim. Wow! And what a trip you have made to an OLD city. My kind of place, as you know. And after buying masquerade masks in Venice for Halloween, while on our cruise, I'll never forget where 80% of them are made!

Wow, that is fascinating. I love old ruins and visited Trier, Germany; Istanbul and Kusadasi and Rhodes, Greece last fall and prowled all the old ruins. They are so fascinating and I alway try to imagine how people lived in that time...ciao

What an amazing city Shkodra is. I was there in 2001, and saw the castle and heard the strange legend. Such a dramatic setting, with the mountains and rivers all around.

Great to see your photos of the place and get a reminder!