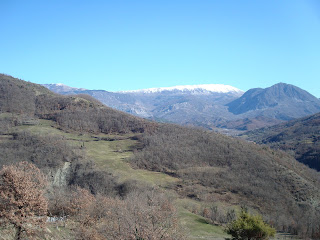 For almost 3 years we've been saying that we would go on the Saturday hike with Tirana's infamous group- the Hash House Harriers.

There are almost 1900 hash groups worldwide, in 178 countries. One member sets the trail, marks it, and then everyone enjoys the hike.
At the end there is cold beer waiting for everyone. 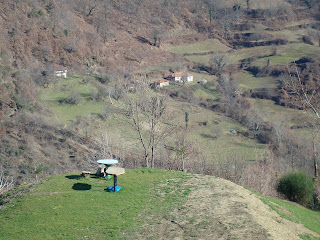 Today's Hash was outside of Tirana some distance, and even the drive out there was breathtaking! We had two choices for the hike- the 'easier' path or the more difficult one. Since it was out first hash and we're not in shape at all, we chose the easier route, which turned out to still be a real challenging hike, starting with an almost vertical climb up a rocky cliff.

It was a glorious day! See the snowcapped mountain in the distance? Isn't that beautiful? And the second photo is a view on our way back down. Imagine enjoying a simple lunch on this table on a glorious spring day!

I have a few more shots to share tomorrow. For now, I'm stiff and aching all over, so I'm off to bed with an aspirin or two. If anyone is in Tirana and is interested in joining the Hash just let me know and I'll get you the information. BTW they do a hike almost every Saturday starting at 11:30.

HHH, drinkers with a running problem, I've never gone, but it is tempting.

Wow, your "walk" sounds amazing! I love those photos. Wish I was there!

That walk looks nicer than the one I went on last week... so green. Love the HHH... do they still make you sit on a block of ice if it is your first time.. and scull a jug of beer?

My boyfriend used to be a fanatic Hasher in Yerevan. I joined him once, but I got nervous from the slow pace of walking. I am more of a hiking kind of person. ;-)

Lynda, the Hashers in Yerevan don't use blocks of ice, they do use flour in fairly large quantities for a Hasher's "baptism".