Necessity is the Mother Of... 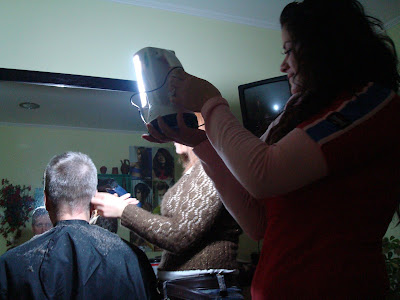 Life in Albania has its own special challenges. Like this one. The Big P and I both go to the same hairdresser, a lovely girl named Suela. Sometimes we go together and take Coco along with us, and Suela gives Coco a little trim around her eyes for us. She's a pretty amazing lady and has lots of experience working in TV and theatre in Tirana.

So you might ask me "What's happening in the photo above?"

Well, as I've mentioned before, there is a huge problem in Albania with the lack of electricity. Except for the past two weeks when it's been really stable because of the holidays, the city suffers from extended power outages. Now imagine if you will what it's like going to the hair salon and right in the middle of having something done to your head, the power goes out. And there's no window to let in a bit of light. What happens?? The talented and highly adaptable hairdresser grabs her huge rechargable flashlight and has her young assistant hold it high in the air while she continues the haircut not with the nice electric shaver she was using, but with the very old-fashioned razor blade held in a a stainless steel handle. And a fine job she did, we have to admit!

At the same time I was sitting with my own head covered in BLEACH, feeling a bit teary, and wondering just exactly how we were going to deal with this. For as you know, when there's no electricity, there's no hot water! Luckily for me, Suela has a tiny gas burner for making turkish coffee, which doubles in emergencies as a handy little water heater. So there I was, in a cold dark salon, having tiny buckets of warm water poured over my head, followed by the most vigorous towel dry ever. When there's no electricty, there's also no blowdryer of course.

The unsung hero of the day was Ina, the trainee, who held that heavy lamp in the air for several hours. We weren't surprised however when she quit her job at the end of December. Holding 5 kilos over your head for extended periods of time probably wasn't part of the glamorous life she imagined herself being part of as a hairstylist!

And a brilliant light.

Hi Kim!
That was my favourite post! What a great photo!
Did Suela find a new assistant? I will be looking for work once my course is over so please put in a good word for me. Although I don't do heavy flashlights. But I can boil water.

That is a great tale and an amusing glimpse of your everyday life as an expat.

Wow! What adaptability! I can certainly image a bit of panic on your part with a head full of bleach!

Your stories never cease to amaze me, Kim. What a life in this century!

Thanks for all your comments! There's so much more to this story that I will use it in another post I'm sure!