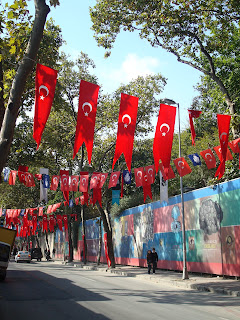 There is something incredibly wonderful about Istanbul- it's soaking in history- lush, decadent Byzantine and Ottoman history. It's colourful, vibrant, and bursting with life. It spreads and spreads itself for miles and miles- it's a neverending city of more than 10 million people . 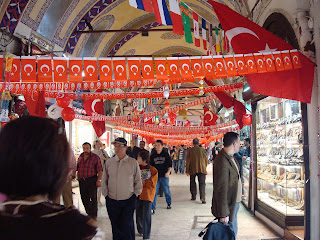 The end of October is a fabulous time for a visit. Today (the 29th) is Republic Day, commemorating Ataturk's proclamation of the Republic in 1923, and as this holiday draws near the city is literally filled with the Turkish flag, a simple red and white symbol of it's history. 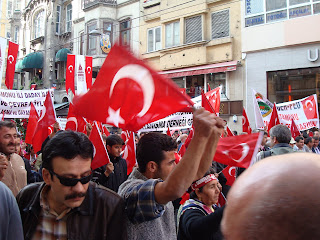 "Red has been prominent in Turkish flags for 700 years. The star and crescent are Muslim symbols, but also have a long pre-Islamic past in Asia Minor. The basic form of the national flag was apparently established in 1793 under Ottoman Sultan Selim III, when the green flags used by the navy were changed to red and a white crescent and multi-pointed star were added. The five-pointed star dates from approximately 1844. Except for the issuance of design specifications, no change was made when the Ottoman Empire became the Republic of Turkey and the Caliphate (religious authority) was terminated by Ataturk. Many traditions explain the star and crescent symbol. It is known that Diana (Artemis) was the patron goddess of Byzantium and that her symbol was a moon. In 330, the Emperor Constantine rededicated the city - which he called Constantinople (today's Istanbul) - to the Virgin Mary, whose star symbol was superimposed over the crescent. In 1453 Constantinople (Istanbul) was captured by the Ottoman Turks and renamed Istanbul, but its new rulers may have adopted the existing emblem for their own use" (From http://www.allaboutturkey.com/) 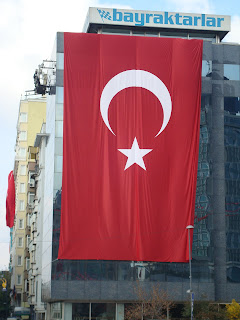 Ah. My blogger pages are coming up in Turkish. I guess my settings got changed. Anyway.
Thanks for the explanation of the flag. I was going to Google that myself. All the flags were amazing. I just posted some of my photos, including some featuring Ataturk. Did you notice his face on the money? Those eyebrows are intense!
Welcome home.

So you landed in Istanbul at party time; it must have been a treat! Much luckier than me; I got a snow storm... ;)
Thanks for the comments on Blogtrotter
Have a great weekend!

My sister, Ruth, would love reading this, since she lived there for 3 years (I think). It's always fun to read about the other great cities of our world. Thanks, Kim.