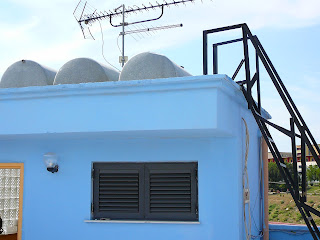 A quick update on our water saga... the powers that be decided that 5 water tanks on the roof just weren't enough for some reason and that we needed two more in the garage, so they brought them in yesterday and sort of installed them then left at 5 pm. We were told that these would fill up with water and then by some miraculous feat of engineering the tanks on the roof would then be filled. Good plan. However we woke up this morning with a garage floor flooding with water and Peter (already dressed for the office) had to quickly evacuate a lot of things which were still being stored in the garage (things like paintings!) Needless to say he was not a happy camper. Peter did a little searching around the tank and low and behold he discovered a HOLE near the top of one of the NEW tanks- a nail-sized hole. Yep. At 10 am the (un)handyman was back to finish the job and to repair the hole. It's 3 pm and they've left, and I am crossing my fingers that this is the end of the water problem. We'll see. 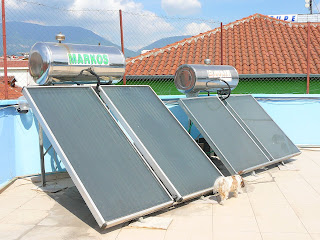 Part of the problem is apparently due to the fact that we live inside the "Student City", where all the university dorms are located, and the city lowers the water pressure in this area during the summer when few students are living here. We had expected some problems due to this (which is why we have a huge generator and stabilizer), but we really thought the 5 water tanks would prevent problems with empty water tanks. But apparently the lower pressure allowed too much air into the pipes and then the pump wouldn't work. Soon I really will be qualified to speak as a civil engineer! 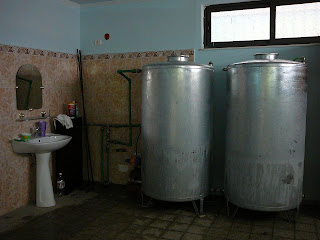 For today I have enough water, and for that I am grateful.

Good heavens! The things most of us take for granted, eh?

Let's hope you'll continue to have as much water as you need. Maybe you'll be the one to invent a new, improved system that actually works!

Ah, the local slicksters are gouging the rich American foreigners... now I begin to see the picture more clearly.

wow - now that doesn't sound like fun at all!