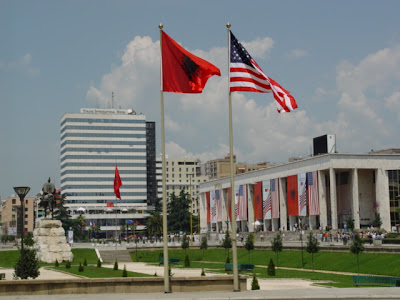 The city has been gearing up (aka cleaning up the main streets) for several weeks now, all in preparation for today- the big day- the historic first ever visit of an American President to Albania. The city looks amazing with many flags and banners all over the place. The main streets were cleared of all cars and were blocked for several hours. The city was in quite a festive mood with many signs of the positive feeling that Albanians have for America. It was fun to wander round the city with my camera and take shots of the people waiting for the opportunity to see the President pass by in the motorcade. It was a very sunny and hot afternoon, and shady places were few and far between along the route, but everyone was in good spirits and the mood was really cheerful. Several people stopped us and asked if we were Americans, then explained why they love the US. The only visible moment of unrest occured when some people were giving out free teeshirts along the route and of course everyone wanted one!
So a few shots from the day: 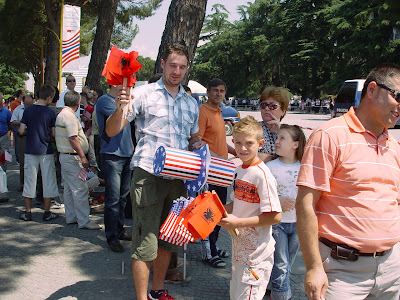 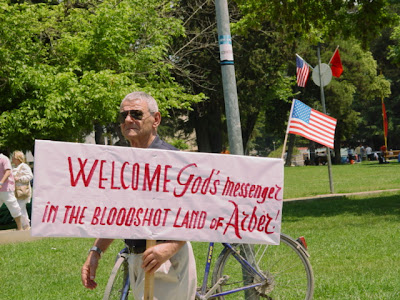 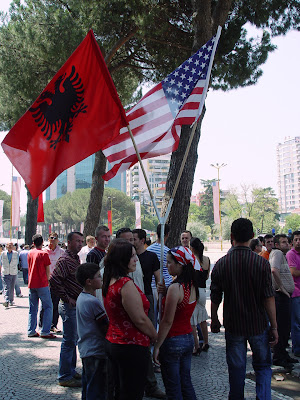 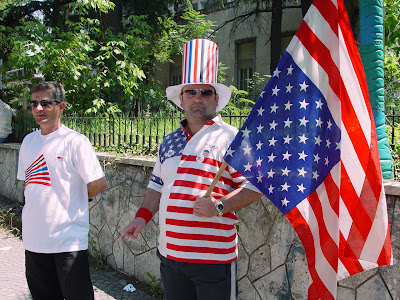 fantastic photos, all hail president bush and his glorious regime! :)

Too much red, white & blue for my taste!

Notice the upside down US flag in th last shot!!

One of few places in the world left where Bush would still get this kind of welcome. When Clinton visited Denmark in the 90s he was greeted in a live session in Copenhagen town square by 100,000 people with Danish and American flags. When Bush came during his presidency he was kept totally away from the public, since there were demonstrations against him everywhere. Sad how relations between USA and the world have changed in that way.

By the way? This guy with the sign welcoming God's messenger: What is the last word? Azbez or Arber? What is this in reference to?

sben, that's so true- Albania is one of the last places that still love the US (even Bush), but many Albanians who I talked to said they wished it was Clinton visiting since they see him as a herois part of the so called "Kosovo solution".
Arber is one of the very old original Illyrian tribes of Albania. In the 15th c a large group of Arber left Albania and settled in Italy, where they still exist and are called "Arberesh".

"What is the last word? Azbez or Arber? What is this in reference to?"

Arber / Arberia as well as Shqiperia are other names for Albania. Albania is only used by foreigners, Albanians themselves call their country Shqiperia. Arberia is an older name, slightly more poetic I guess.

We thought of you all day yesterday, Kim, when we had CNN Int'l news on here in Amsterdam. Much of what you said here was said there...that Albania is one of the only places that loves Bush so much and can't understand why he isn't rec'd well elsewhere around the world. Some were so eager to reach out and touch even his hair, they said.

Greetings Kim, and thank you for stopping by my blog.
:)

Ginnie... there are some pretty weird stories of people kissing his hand like the pope etc. The best one I heard today was that Bush lost his watch somewhere in the crowd here, then tonight I heard he'd found it again. It appears he gave it to his bodyguard and forgot it.

ITS said...
This comment has been removed by the author.
2:13 PM

Hey, Serbs tell that joke too, only with Milosevic instead of Berisha, of course, and flying over Serbia instead of Albania :)

Amazing how quickly news can travel int he blogosphere. I read here about Bush losing AND finding his watch two days ago. Then yesterday the Danish web media started carrying the story about how his watch was stolen (after it was known fact that it wasn't true). Only this morning they are starting to print retractions, saying it was not stolen after all.

I had no idea how big of a deal this watch thingie was, when I wrote that joke yesterday.

But then I saw online message boards from all over the world blow up over this. Serb and Greek snakes jumping at the opportunity to tarnish our reputation....

I was really unhappy when this story hit the news. It isn't the kind of interest that Albania needs, and of course the Serbs are all over it. A watch could be stolen or lost ANYWHERE of course, and there isn't enough eveidence to prove that it actually did happen.
However, I have first hand evidence of the press sitting in the Tirana International Hotel waiting for the motorcade to drive by. Apparently they were bored to tears and had absolutely NO interest in the city. A story about a stolen watch however-- well I guess that's news in their eyes. Sad- yes.

traveller one...i came across your blog via pam's (american spoken here). this is a great post. yes, very nice upside down american flag. and i still don't believe that sign heroifying bush. sad. very sad. as is the watch story. too much. i look forward to "stopping by" more often!