Berat In A Day

A long time ago, when I first started blogging, I posted about a trip to the Albanian city of Berat. It's been two years since I made my first trip there and I finally managed to do it again earlier this week. With a small group of my friends, a knowledgable guide, a terrific driver and an intrepid minibus, we travelled over 500 kms- every one of them enjoyable. Yes, even the one where the cow on a truck in front of us decided it was time to empty her bladder and let a long, hot stream flow out over the back of the truck and down the road! We laughed like schoolgirls but forgot to take photos. After that we just hung our cameras around our necks and never missed an opportunity again.

Our first stop was at Durres Beach for a morning coffee, then we continued on to Berat, a 2.5 hour drive. Berat is an ancient city, built along the Osum River. It is incredibly picturesque, with beautiful white houses, built tightly together, rising up the hillsides on both banks of the river. There is an incredible number of ancient mosques and churches which were (luckily) protected from the ravages of the communist "anti-religion" campaigns. It has recently applied to UNESCO to be officially accepted as a world heritage site, a nomination I think it should definitely receive. 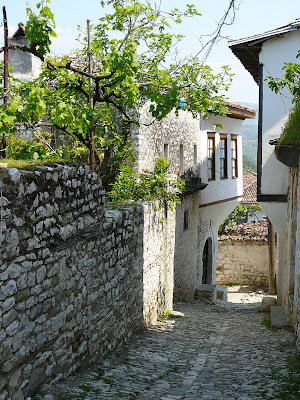 We were really fortunate to have the Director of Berat Museums lead us on a tour through the ancient citadel on top of the hill. Museums are especially enchanting when they are still inhabited by local folk, and this is one of those places. It is hard to imagine having to walk up this high hill with all your provisions but this is how hundreds of people still live in Berat. The Onufri Museum is probably the most special of all the the churches inside the citadel. It is housed inside the Church of St. Mary, which was built in 1797 on the foundations of an older church. It houses a truly special collection of icons, most by Onufri himself, a master of colour, especially his own shade of red, now known in the art world specifically as "Onufri Red". I'm an admirer of these orthodox icons and for me this museum is truly a little gem. 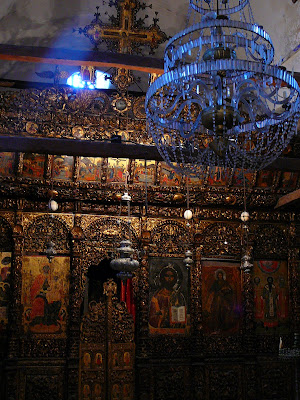 In the afternoon, after a humongous lunch at Castle Park, we continued our tour in the lower part of the city. There is something enchanting about a city where churches, mosques, and tekes (Bektashi places of worship), nestle peacefully beside each other. In Albania it isn't unusual to find that some members of one family are Muslim while others are Christian. Sometimes just the father is different, a throwback to ancient times when the Ottomans offered a tax break to Muslims and so the father often converted. We slipped off our shoes and visited the 16th c. mosque and the teke, both beautifully decorated with delicate painted ceilings. Some enterprising Albanians have recently restored a typical Berati home (albeit with a wierd mix of ancient and modern details), and we were able to have a look inside. It is now being used as a B & B and looks like it would be a delightful alternative to one of the local hotels, though a bit of a challenge to get to with luggage in tow. It offers good views of the river and the narrow old bridge. We all agreed it would be a memorable place to stay. 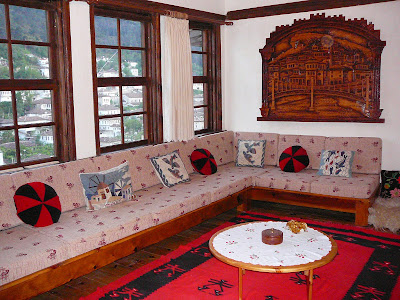 By this time the sun was quickly falling behind the mountains and we strolled back to our hotel, becoming part of the traditional "promenade", an Albanian evening ritual in which all the townspeople put on their best shoes and walk up and down the boulevard for an hour or two. None of us was hungry so we decided to skip dinner and to just have drinks on the roof of our hotel. We wrapped ourselves in our pashminas and as the daylight disappeared, we were enchanted by the twinkling lights of both the ancient city and the stars. Oh what a perfect day. 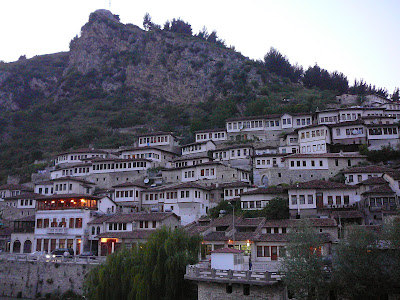 Great photos! Wish I'd been there

I don't know how I got to your blog, but it was amazing to find out that you've also posted on Berat the same day I did on Blogtrotter. I believe your picture towards the «windows» was taken exactly from the same Hotel terrace I took mine. Coincidences.
Loved to see your blog!
Gil

I am a total glutton for cities like this, Kim, and would go there in a New York minute!

I was so happy to see your blog. I was born and spent my childhood years in Berat, and although I am now in the States, I've always dreamt of going back. It's great to see how well the place is looking.