Sunny Sunday at the Beach

Oh what a glorious Sunday we experienced yesterday! We woke up early and watched the sun come up over Mount Dajti. The air was warm and clear and we decided to head to Durres for the afternoon. We are so lucky to live so close to the Adriatic Sea- only 30 minutes in the car and we are there. I called two lovely girlfriends (A & B) and invited them along. A knew of a good seafood restaurant at the very north end of the city's port and so we went there for lunch. After the requisite "I'll have such and such" - "Sorry we don't have that today", repeated several times, we laughed and asked what they did have. Ohhhh well.... Peter struck gold because they actually had an 800 GM LOBSTER somewhere in the kitchen! And I chose the grilled Scampi which were unbelievably sweet and messy! What FUN food we enjoyed! My huge plate of Scampi! 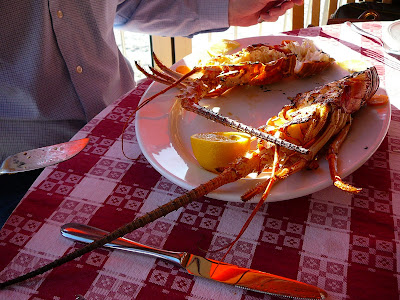 P's Lobster-- take a look at those long feelers! 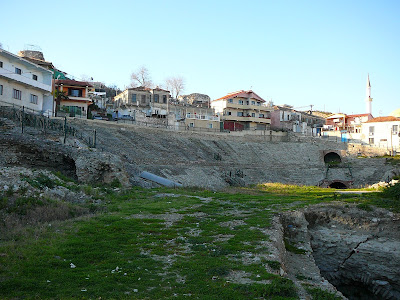 After lunch we made a stop at the incredible 2nd century amphitheater, the largest in the entire Balkans! As you can see it has not been completely excavated because-------there are houses built on top of it!! There would have been room for over 15,000 spectators- now that's HUGE! You can go down into the vaults to see where the gladiators waited and the pens where the lions were kept. 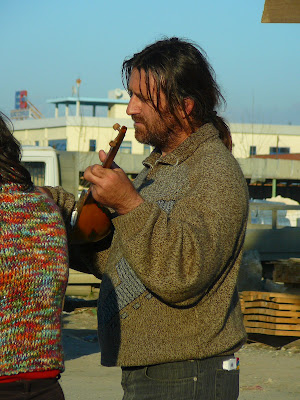 As we were driving from the north end of the city to the southern beach area we spotted this fellow on the side of the road, strumming a very lovely instrument. We made a u-turn back to him and stopped to see what he was selling. I thought they were ukeleles but we decided they weren't. Maybe they were lutes of some sort. Anyhow, B was delighted to buy one as a present for her son! 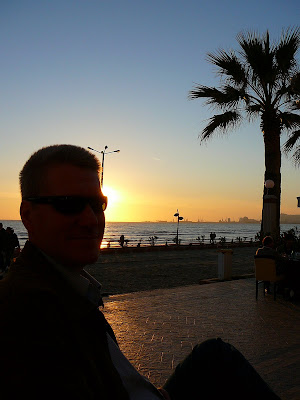 Here is P looking ultra terrific with the sun setting behind his head. We sat here and had pistachio and chocolate ice cream and cappucino's! Yum yum. 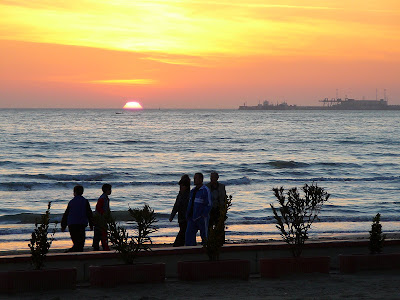 I truly felt like doing a happy dance several times throughout the day. I pinch myself to make certain I'm not dreaming. How lucky am I to live where I do! It's the beginning of March and I'm not covered in snow, but in the warm, gentle rays of the Meditteranean Sun. MMMM good!

Kim, that instrument looks like a "cifteli", a musical instrument played by the Albanians from the North.

Coincidentally, there is a very large, new "suburb" at the entrance of Durres populated by people who moved in from the Northern mountains during the '90s.

A little bit more on the the cifteli from Wikipedia:

Thanks for the info ll.t.! It did only have two strings but they made quite a lovely sound.

You are driving me crazy... we got 30 cm of snow this past friday only. And it's snowing again today.

There is so much snow everywhere that the Frenchies can't keep up the with cleaning the roads.

No wonder anti-depressants are the highest selling drugs in these parts.

anywayz... some days we'll trade countries again... and then I will be the one laughing all the way to the Adriatic.

But guess what? P just signed his new contract and added an extra two years to our time here! Yippeee!

How long is your sentence in Montreal?

Kim, I absolutely loved the picture of the long haired guy with cifteli! It shows a lot about the fluid state of the Albanian-ness nowadays. The triangle Durres-Tirane-Lac is changing into a melting pot of the Albanian nation with such incredible energy!! Who knew!!
Can I borrow it for my wee blog?

HI Kim, I do love the sound of this particular post and I feel so happy for you. As I now know it took some time until you developed a "home feeling" in Tirana and it's so good to now feel your enthusiasm between the lines ! Hope that Albania is going to have lots more of such lovely Sundays in store for You and P. Much love from a dusty and noisy house !

jo d... I'm happy to share the photo with you, I just ask for a link back to my blog if you don't mind. This guy was incredibly photogenic- I have more shots of him as well.

Angelika.. How sweet of you to drop by and comment even in the midst of your renovations. Thank you so much!

Oooo How lovely your Sunday sounds.
I always wondered why we were even given a menu, when there are only a few item available. I felt like I was playing a game. "Guess what we have available today???"

What a wonderful way to spend a sunny Sunday! It looks like a beautiful region. Great pictures.

Kim, this reminded me of those wonderful spring mornings as a kid, when I would try to sleep a bit more. My mother would open the windows (I'm sure is not healthy to try it now in Tirana) and the morning breeze mixed with the aroma of the mimosas would wake me finally up. Meanwhile, the sun would have completely gone up, over the top of Dajti Mountain.

tidc... Today is one of those mornings! It's almost 8:30 am so the sun is already high over Dajti, but like you used to do, I lay in bed trying to keep my eyes shut for just a little while longer. But the sunshine wins and I am up. The windows are opne, the Mimosa are is bloom, and I can't imagine being anywhere else right now.

k-dot and cswiss... thanks for dropping by :)

I know you pinch yourself, Kim, as I do all the time. Thanks for taking us on your Sunday jaunt to see things on your side of the world.

What beautiful scenery! There's nothing like spending a day at the beach. I hadn't realized you lived so close to the Adriatic Sea. (Maybe I should go check out just exactly where Albania is, LOL!)

You are terribly, terribly lucky, that is how lucky! And your lunch looks divine. ~sigh.

Hi Traveller One! Thanks for commenting on my blog, I thought I'd return the favour. Albania looks incredibly interesting, what brought you there? You are such an evocative photographer,. I'll go check out your art blog next.
Deb from Saltysplace.

The next time you guys go to the sea, let us know. We will drive to the Adriatic and wave from this side!

Just wanted to wish you a happy Woman's day. If you were in ITaly, I would give you a handful of mimosas!

It's my first time leaving a comment on your blog. I really enjoyed this post. It brought me back to my homeland for a little bit. In case you were interested in learning more about cifteli, here is a recently published article about Albanian music. Enjoy! Stela

Oops forgot the link. Here it is.

Thanks - I think I'm going down with my third cold of the winter, so sharing your pleasure with life in Albania was a tonic!

I've been trolling through your pictures and trying to imagine your life in Albania.... it looks so interesting. And here I am, covered in snow... I'll be visiting again to share in your sunshine!

I think we have to visit - that looks wonderful !

What a perfect day!

Now I know why you are wearing sun glasses in your photo on this blog!! you're hiding those telling eyes!

sunset walk at the beach in Durres is really fantastic!