Down along the eastern stretch of the Lana river which runs through the center of Tirana, one finds the charming little 19th century Tanners' Bridge tucked between the busy road and a small group of shops. Some restoration work is going on these days with older supporting parts of the walls being rebuilt by modern craftsmen. The stones which make the walking path are worn flat and shiny from years and years of use. 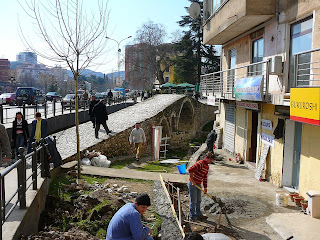 " When Tirana became a citizen center in 1614, with a progressing burst of craft ship and trade. In a favorable geographic position, as a junction of important commercial streets, Tirana after this year won the importance and attracted the attention of its citizens to it, which after this year increased the population number of the city.

Except Egnatia Street, mentioned in the antiquity that passed the western of the today’s Tirana, another important axis was that which linked Tirana with its highland. It was called and continues as such as “Rruga e Shëngjergjit“. This street passed in the eastern part of Tirana, in Priskë e Madhe, Qafe Priskë, Domje, Shëngjergj and further it continued in Biza, Martanesh, Zerqan and to Dibër e Madhe. This was an important street, because it was useful for the movement from these highland regions of the caravans of farming products, for which these areas were distinguished. Bunches of livestock, because of the harsh winter of the highlands moved in the areas with soft climate of the field of Tirana. A good part of these livestock, when winter comes and after their growth in the spring was directed to the trade. Various inhabitants established in the suburbs of that time in Tirana waited the caravans of livestock of the highlands. They “specialized“ in butchery and in working leathers. Some old Tirana families from 2-3 generation and now and on perform these activities. Such are the families of Xheleti, Kuka, etc. Because of this activity, the neighborhood was named “Tabakanë“ and the street was called: “Rruga e Tabakëve, thus of skinners. Even the square took this name and also a group of families even nowadays keep the surname “Tabaku “. Even the bridge of the 18-th century that linked the two sides of Lana was baptized as Ura e Tabakëve. It is a testimony of the city‘s development and the increase of communication with the internal areas. 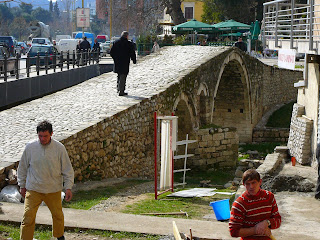 Ura e Tabakëve is distinguished for its harmonious architecture and the proportional scattering of its elements. It is composed by a main arch, on which the bridge raises in a back shape. This arch has the light span of 8 meters and is built with two ranks of sideway arches with thickness of 1 meter. The height from sea level was 3.5 meters. The pavement of the bridge with width 2.5 meters, constructed with river stones is placed without any order. In the two sides of the main arch, there have been constructed two arches in the shape of circular segments with a small space. Ura e Tabakëve played its function to pass from one side of Lana into the other up to the ’30s. After that, Lana took another direction, displacing its permanent way.

The old stony bridges testimony old ancient traditions of our country in the field of constructions. They verify the great work made by our popular masters and more concretely those of Tirana’s. 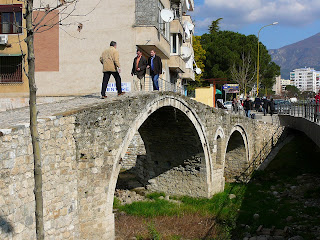 "This elegant Ottoman stone footbridge was once the main connection between Tirana and the highlands to the east. It was use to get agricultural produce and livestock across the Lana River to the markets, and sits in the area of skinners and leather workers. The Lana was rerouted in the 1930s and the bridge was neglected, eventually becoming a rubbish tip."

From: Tirana In Your Pocket

I love old bridges - we saw some beautiful ones similar to this when I was in Turkey (far too many years ago).

I LOVE bridges like this, Kim. It does intrigue me that it doesn't have side rails. Do you ever hear of anyone or bikes getting pushed off somehow? That would really be a nightmare!

Hey Ginnie not many people use it, putting rails to that bridge would diminish the cultural value.