We decided to change our route from Mogliana Veneto to Trieste after looking at our maps and realising that it wasn't such a long distance between the two cities. So we drove north to Treviso, Conegliano, and Udine before heading southeast to Trieste.

Treviso is a lovely fortified city, similar to Venice with its many canals and a handsome Duomo. 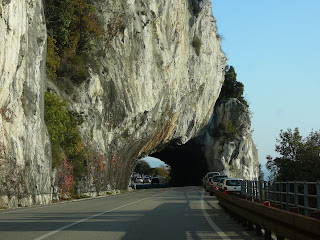 I have to admit that the stretches of highway between the cities isn't a very pretty drive, basically fully covered with industrial and commercial ventures. It was at this point that I realised just how much the Italians LOVE to SHOP! There are huge supermarkets every few kilometres and masses of colossal warehouses all along the road. Conegliano lies in the center of the Prosecco (Italian Champagne) growing area and has a well known wine school where winemakers from all over the country come to learn their craft. The prettiest part of this leg of our journey was from Montfalcone to Trieste where you drive along the Adriatic Sea with the cliff falling off on the right side of the road. I love this type of scenery and found myself saying "wow" more times than I think Peter cared to hear.

We arrived in shimmering Trieste in the mid afternoon and 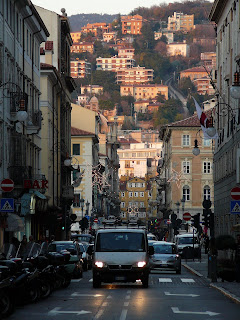 easily found our hotel- The Starhotel Savoia Excelsior, located right on the sea directly across from the convention center. It's one of those majestic grand hotels where if you just sit for awhile and close your eyes, you can feel the ghosts of the past guests who once filled the bar and the lobby. Trieste was once a stop on the Orient Express and has quite an illustrious past, including having been Austria's seaport and naval center. There's something inspiring about the city I suppose, and many writers have spent years here working on their novels. We had a rather luxurious suite on the top floor which looked out onto the sea, affording us a wonderful view of the sunset that evening. However, though it was 'luxurious', I had a strange feeling that this hotel was nearing the end of its life. We asked about dinner in the restaurant and were told it was closed. Hummm. Perhaps not a good sign. I just did a search on Google for the hotel and well--- it's now closed for renovation! I guess they're going to get rid of those ghosts once and for all.

We had a good walk around the city before dinner, with stops at the Roman Amphitheater, 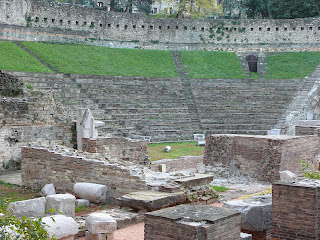 the neoclassical Piazza dell'Unita d'Italia (Italy's largest square facing the sea), and a stop at a charming wineshop where I bought a bottle of exquisite Vin Santo, my secret passion. No it's not perfume- it's a thick, sweet dessert wine, served with a few crunchy biscotti which are softened by dunking in the wine. I think it's the perfect way to end every Italian meal. I have fond memories of sharing this treat with my daughter after every dinner when we went to Florence together several years ago. Though the hotel was showing signs of wear, the bed was sumptuous and covered with perfectly pressed white linen. We had another fine sleep and enjoyed a fine breakfast in the morning.
Now off to Croatia!