Yesterday was such a beautiful day that we decided to try out our new car and go for a drive to the Albanian city of Durres on the Adriatic Sea. The worst part of the drive is just getting out of the city, especially on Sunday because it is the official "Wedding Day", which means the streets are crowded with wedding parades slowly driving around the city with the 'captured bride' in tow. The drivers lay on their horns non-stop and a videographer follows in another car. This guy either hangs out the car window or the sunroof and gets the whole kidnapping on tape. It's kind of charming and annoying at the same time because the car with the video guy always seems to believe that it's perfectly OK for them to drive in the oncoming traffic lane. Well actually that's annoying all the time cause Albanians all seem to think that's OK. 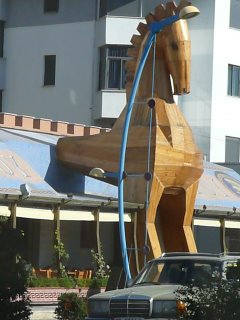 Haven't you always wondered where the Trojan Horse was hiding?
Well we found it in Durres!

We stopped at the Hotel Adriatik for a coffee and were surprised to find people actually IN THE SEA! At the end of October! Yes the temperature was probably somewhere around 25 celsius, so it was certainly warm enough, but this is the country where people have been giving me nasty looks for wearing my sandals after September 1st. We decided to enjoy the Sunday Buffet and live music inside the dining room, thus escaping the unavoidable sunburns.I pinch myself because I actually live in a country with PALM TREES! 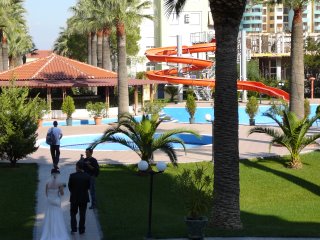 Like in most countries, there are certainly different standards of living in Albania, from the very poor to the very rich, with most people living in the so-called 'middle class', although to western eyes even the middle would seem far below standard. On the way to the sea there are growing communities of rather grand houses with several floors and large gardens. Contrast that with the shanty town you pass while entering Tirana. 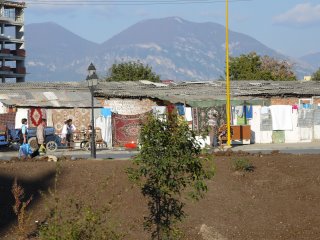 At the end of the afternoon we were back in the city and sat for another coffee beside the fountains in the "Taiwan Park". No one's ever explained to me why this park is called Taiwan when there's not even a Chinese restaurant anywhere near the park! But it's a fun place to sit and do some people watching. 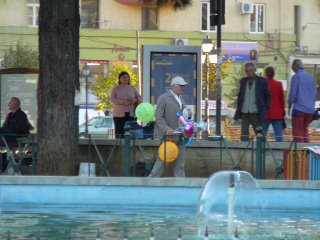 I liked the balloon seller with a total of three balloons- either he had a great day selling balloons or his stock is rather limited! 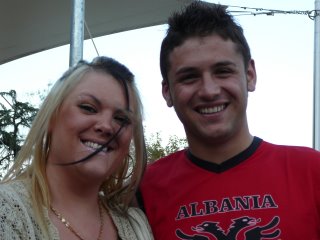 This is a interesting couple who stopped to talk to us for a while. She's British and he's Albanian and are here for a family visit. He was totally adorable because he has a strong London accent on top of his Albanian one! 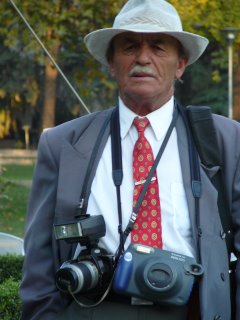 And lastly... the official park photographer who caught me snapping his photo and quickly came over to me wagging his finger and telling me not to take his photo! Well at least that's what I think he said! He walks around the park calling "Photo? Photo?" and to my surprise people do have him take their photos, esspecially young couples in love.
So we had quite a long, well spent day, and we returned to our apartment content and in love.

thanks, I was looking for my trojan horse! I am planning a small week trip around Italy in November as well. I'm not sure when, as my cat has had an accident and needs watching for awhile now, but if it's at all possible, meeting up in italy for coffee sounds fantastic. happy travels.

I envy you and thank you for sharing your life in Albania with us in your blog. I’m in Paris since 1998 (I love Paris) but I miss badly my country and even more because is changing every day. Hope have a coffee one day with you in Paris

Jessica... love your blog! We'll keep in touch and keep our fingers crossed that things will work out for us to share a coffee!

Tetena... A coffee with you in Paris would be a huge honour!

looks like a beautiful outting! thanks for the help with the photo opinion!

Awww. What a lovely Sunday! I chuckled when I thought of how "old people" used to do that every Sunday as an outing :)

From what I have heard through the years, 'Taiwan' has a tragic-comic story :D!

Apparently after Albania broke it off with China because the latter was not communist enough, they were the only country in the world to formally recognize Taiwan as an independent country. To celebrate that we named our best restaurant "Taiwan". :D Sad or Funny?!

Thanks again for sharing your day!!
Joni

From what I have heard through the years, 'Taiwan' has a tragic-comic story :D!

Apparently after Albania broke it off with China because the latter was not communist enough, they were the only country in the world to formally recognize Taiwan as an independent country. To celebrate that we named our best restaurant "Taiwan". :D Sad or Funny?!

Thanks again for sharing your day!!
Joni

Thanks for sharing your day with us. I had to laugh at the official park photographer bit. Didn't you try to sell you shot to him? ;-)

An official park photographer? Now I think I have finally heard it all!