When I returned home last Wed. I found a little surprise in my inbox- an email from my blog friend Balkan Baby (aka Ed). A month or two ago, Ed announced his intention to travel around the Balkans with only a small backpack, a tight budget, and a very carefully planned itinerary. He asked if anyone who read his blog could possibly give him a bed for a night or two if he was in the area. I wrote to Ed and told him he would be more than welcome to stay with us if he came to Tirana, and he wrote back and said he'd be here in the beginning of June and he'd definitely take us up on our offer. So when I got an email from him last week I thought he was just confirming our plans, but I was wrong and Ed told me his plans were changed and he would arrive the next day. I take about a week to unpack from any trip so my house was a bit chaotic but nevertheless I let him know it was still fine. A little confusion occured between our Croatian/Albanian mobile phones and in the end Ed didn't arrive until Friday afternoon.

Coco and I met him in front of the National History Museum which is a block away from my house. I spotted Ed waving goodbye to two other guys and asked him who they were. He quickly told me that he had met these two guys somewhere along his route (I think in Ohrid Al.)and that they were going to go look for a hostel. Me, being Miss Hospitality, told him to call them back and I invited them to stay with us as well.

So then we had 3 incredibly nice young men stay with us for two nights and I was able to practise my mothering skills which I'm afraid have grown a bit rusty. We had a really interesting multicultural weekend, with Ray from Northern California, Pascal from Quebec, and Ed who is English. I must say these 3 guys are all very intelligent, exceptionally well-mannered, and their mothers (and fathers) should be proud of them. Peter and I were impressed with their ambition to travel alone all around eastern Europe including the Balkans. I think that travelling alone in western Europe is a breeze compared to the east mostly because of the lack of basic travel amenities, ie. hot water and towels. But here were three courageous travellers seeking out unusual places and experiences, and we are more than happy to have met their acquaintance! If you get the chance to meet fellow bloggers, follow your heart and do it- be brave and expand your horizons.

A friend is a present you give yourself. (Robert Louis Stevenson) 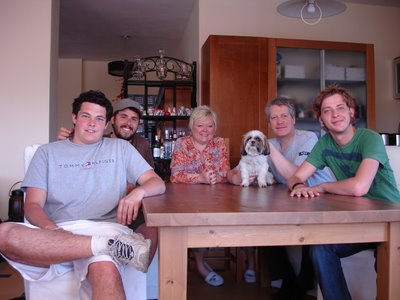 How charming! I love the picture and I love your new icon as well!

What an absolutely heartwarming post...I had this grin on my face when I saw the pic as I also loved the quote that went with it. Indeed, friends are gifts to be treasured!

Lovely quote and you're right, we should always be willling to expand our horizons.

Never mind they're brave (which I absolutely agree they are) but inviting all these strange young men into your home! Wow.

My first meeting someone off the internet experience wasn't bad exactly, but it was boring. And a little bit scary. I'm considering risking a blogger meet. You may have convinced me the benefits outweigh the risks!

Oh that was so nice of you and well i'm sure you've made new friends and had some very happy guests. :)

I agree with JVS that you are brave; although at least with blogs you can get the "feel" of people by the way they write!

When we were travelling in Europe a few people let us camp out on their properties, all over Ireland and Scotland, and one woman from Rome took us into her home for a week! Her mother thought she was crazy, but once she saw us quickly adopted us too!
I hope one day to be able to return the favour!

I'm so proud of you and Peter! You definitely have the 'gift of hospitality'! Someone did that for Carl 40 years ago!!

Friends are great, and I believe that being social is all part of a healthy, balanced life.

Some nice folks around your table!

Yakima... Ed and I talked about you! I had no idea there is a place called Yakima in Washington state!

Rowena... I too love the photo... there I am surrounded by 4 very charming gentlemen!

expat t... a girl can never have too many friends :)

vernicious k... that's so true. I knew Ed would be a sweetheart just from reading his blog.

Miss Tango... Great story! And if you're ever travelling thru Albania-- well... I have a free bed!

Turtle Guy... Being an expat, you make friends, lose friends. But hey-- our blog friends can remain friends forever!

Good on you - from days long, long ago I remember how at times hitch-hiking could be tedious in the extreme (not to mention the stress as your kind driver falls asleep at the wheel climbing a mountainside road at night) but the joy of it was the wonderful people you got to meet. Just to reassure your other visitors, I don't think any of Ed's regulars would have had any doubts about what he'd turn out to be like in person.

As a substitute for being able to say thanks again to all the kind people I met in my travels when I was younger, thanks to you and your hubby for your kindness to the three wanderers.

Why Owen, those are such kind words. Thank you!

Italian for, he who finds a friend finds a treasure.

I loved this one.
It looks like you had a lovely time.

This is a nice story and a nice photo (especially loving your slippers LOL). I think it's great you opened your home to these people and obviously made them feel welcome!

PS: I'm glad to hear you had a great time in NY. You'll have to give me some pointers, I'm planning a trip there in September and so far have arranged nada!

Aww, what a generous gesture! I'm sure those young men will remember your kindness for years to come.

Coco looks pretty pleased to be in the middle of it all. :-)

You really are inspiring, Kim! I love your "hospitality to strangers." Only God knows which of them, if not all, were angels in disguise!